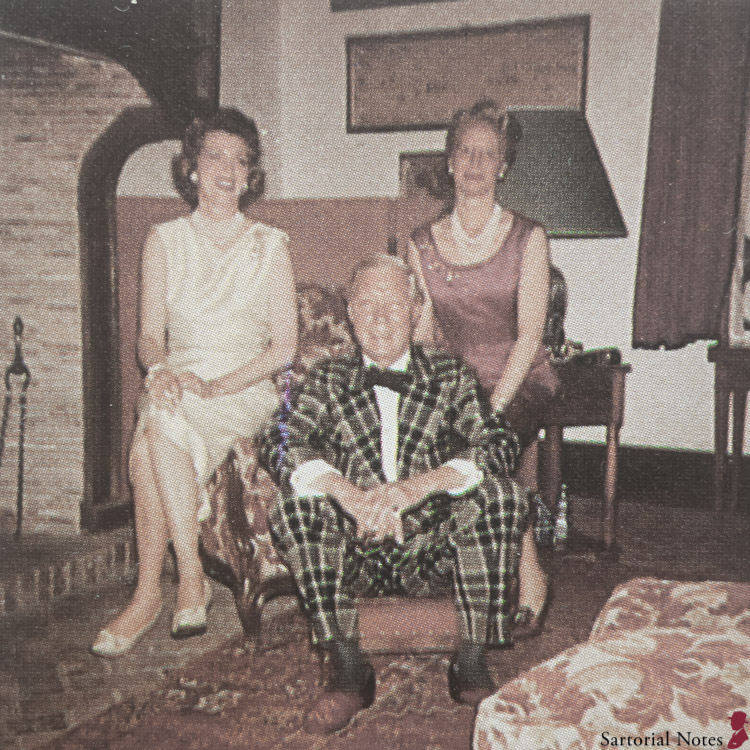 The Duke of Windsor in a green tartan dinner jacket at Cabrol’s country estate outside Paris. From the book Windsor Style. 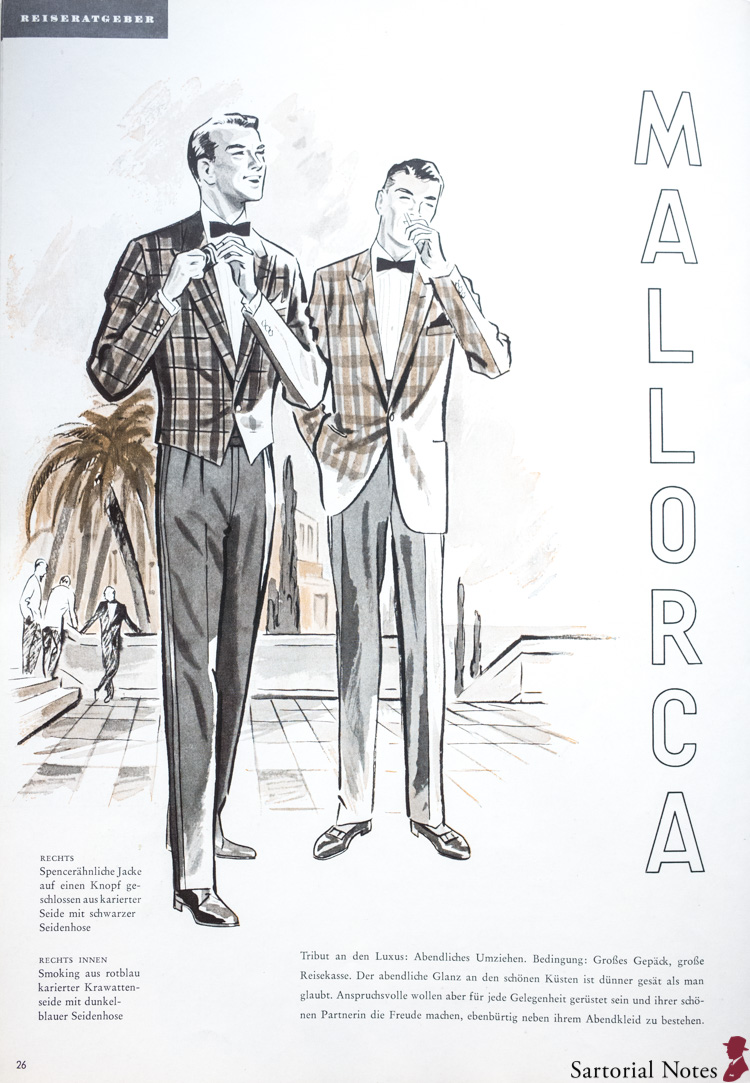 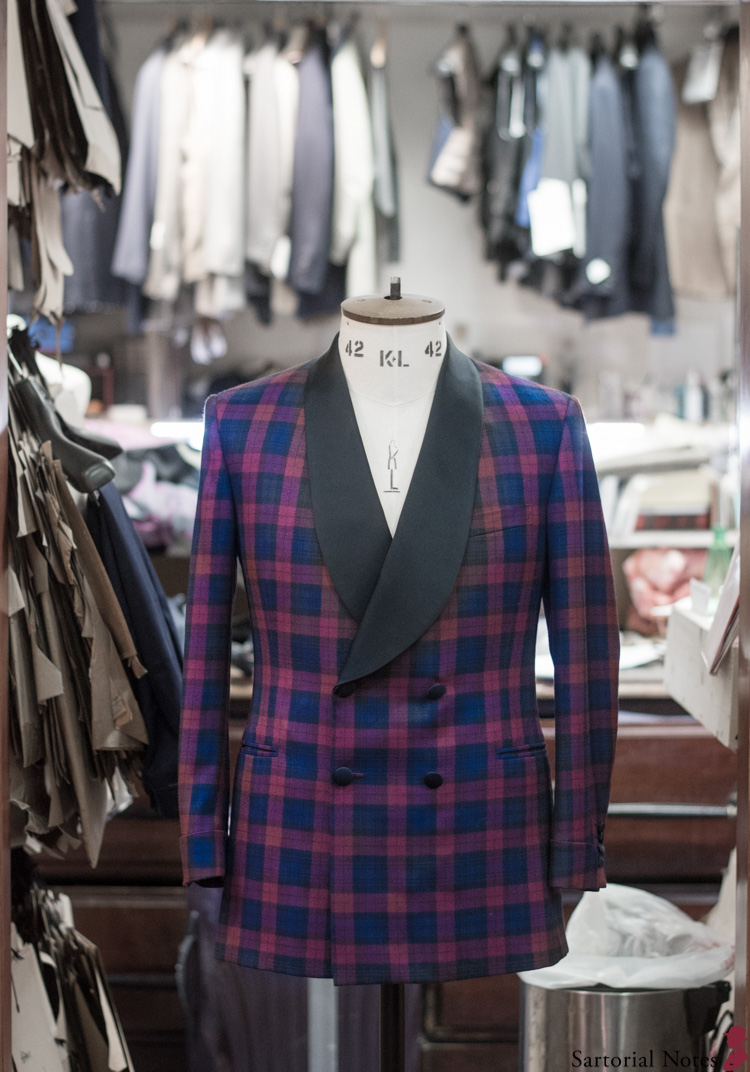 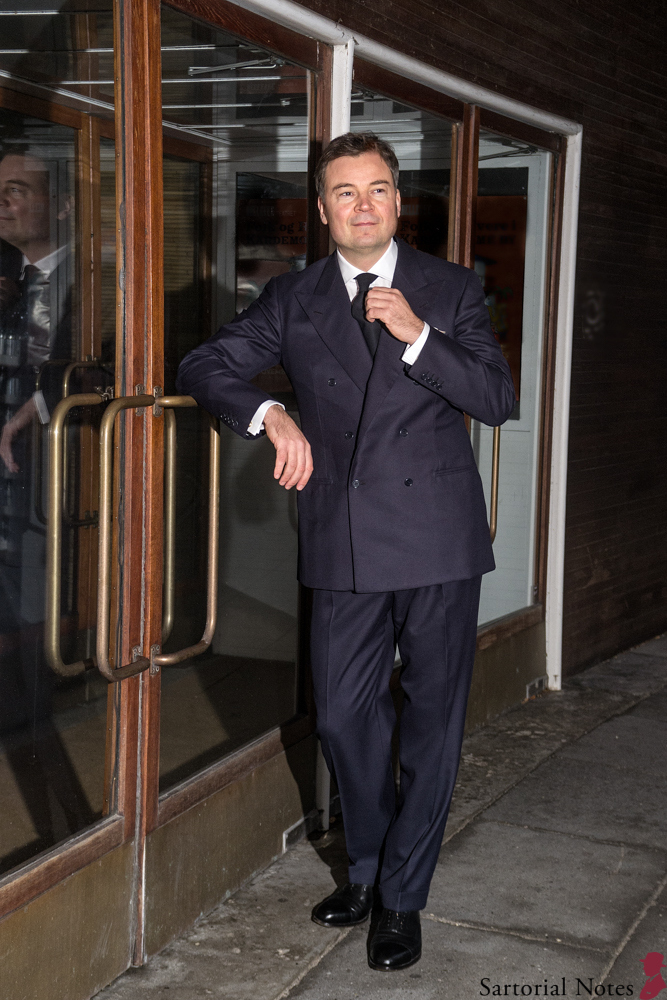 The suit. A bespoke species by Michele Mescia.

Fashion affects our view of what is good clothing style. Youngsters see trousers that do not cling around the legs as baggy because narrow pants have dominated their fashion experience. Trouser pleats are judged as old fashioned. A 9 cm wide tie blade appears awkward. And so on.

To some extent, this must be. Taste and comfort in attire are affected by the time. The pure gaze freed from time is an illusion.

This recognition may be particularly important for those who like classical and so-called timeless style. Also what is classical and timeless changes over time. Two jacket vents at the back is an example. Vents are seen as a classic and a natural choice on Savile Row, in Italy and at all top tailors. It was not so before World War II. In the stylistically highly praised 1930s, vent-less jackets were the common choice, also on Savile Row.

However, relativism must not take over. You find clothes styles that are actually more successful than others. This is what you notice as you move from the theoretical position to the experienced practitioner’s position. A virtuous masters’ judgment over a given piece of masonry becomes authoritative across time. His talent and profound experience – his eye – trumps the Zeitgeist. He senses the quality of the stones and the mortar, the surface’ color hue, precision in the result, in short, he makes faceted observations, which he at a split second compares to an even more faceted inner landscape of experience. If he sees the given masonry as a good, functionally and aesthetically, it is actually good because “he knows what he is talking about.” The layman’s view of the quality of masonry is of no concern, it’s secondary. Everyone’s opinions are not equally valid here. It’s a principle that you have to cling to in field of clothes, while fashion puts judgment under pressure. One has to believe there are clothes styles that are better than others and defy the theoretical contender, who is looking to relativize all positions.

The modern suit has a history

Few become practitioners of an art form, be it painting, poetry or the art of the suit, if they don’t have knowledge of the history of the art in question.

Especially I have the current slim fit suit in mind. I want to show how it is a temporary shape, and that the suit has changed over a hundred years. Time is constantly molding the timeless uniform. One must understand the history of the suit to enrich the judgment in the field of the suit.

In the early 1900’s, the lounge suit is new clothes in the city. So far, as a man of the bourgeoisie, you have dressed in frock coat and morning coat. The 19th century tight-fitting body coat is still present. The city lounge suit follows the body’s lines. The jacket skirt is long and the lapels are short, so the jacket looks a bit like the morning coat. The suit trousers are narrow as well. They have no (open) pleats at the waistband. Some fashion guys have begun to turn up their trousers, a style imported from the cricket field. 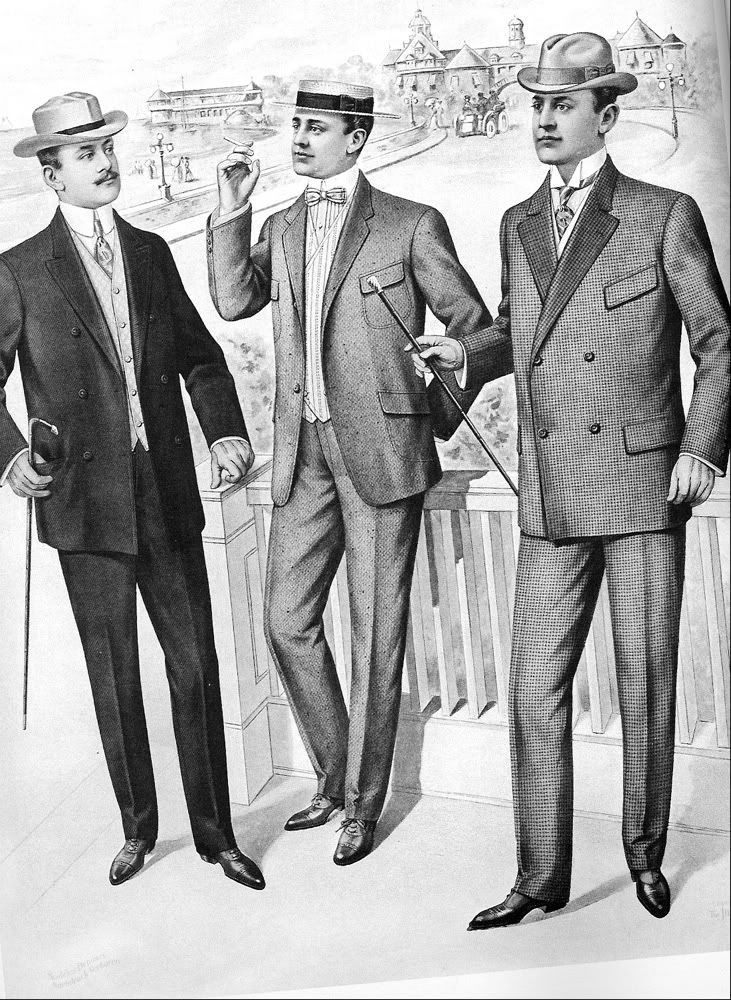 Around 1910, tailor Lars Larsen in Paris invents trousers with open pleats so that the crease can run sharply to the waistband, and so that there will be a little more room in the pants. The fashion catches on, it spreads to England and Savile Row. Today it has turned into a basic design element in suit pants. 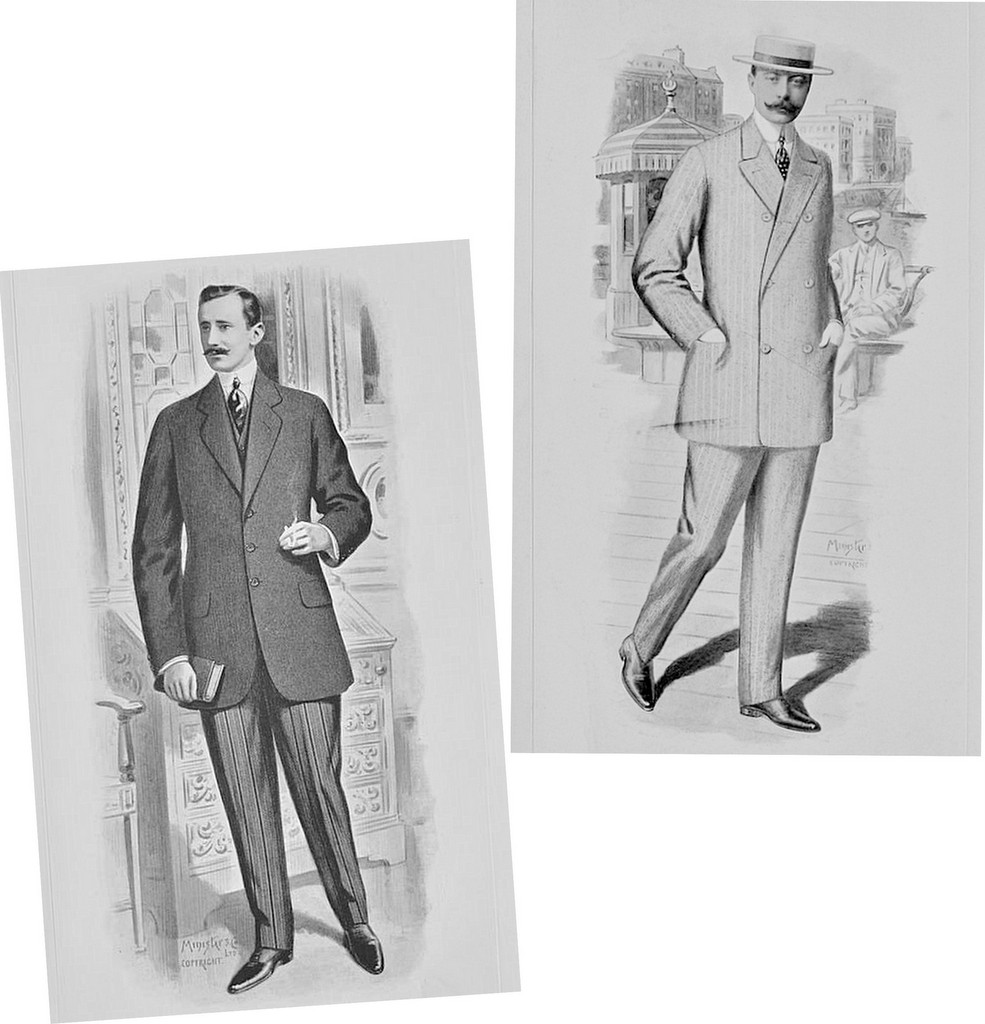 In general there is a showdown with the tight Victorian cut of the suit at that time. In his memories, the Duke of Windsor reports that he and his friends begin to “dress softly” in the 1920s. His tailor, Fredrick Scholte, becomes famous for his “drape cut” with extra cloth over the back and chest of the jacket and in the upper sleeve.

In other words, there is a special fashion bond between the 1930s, 1940s and 1950s in the interpretation of the suit. In the 1930s, the suit grows, it grows even bigger in the 1940s ending in the bizarre zoot suit before it shrinks a little again in the 1950s.

In the early 1960s, suit makers ditch the generous cut. In England they call it a shift to a Neo-edwardian fashion with reference to the first ten years of the 20th century, before Lars Larsen, The Duke of Windsor, Oxford Bags, Scholte, etc. pushed the style of the suit in a more roomy direction. 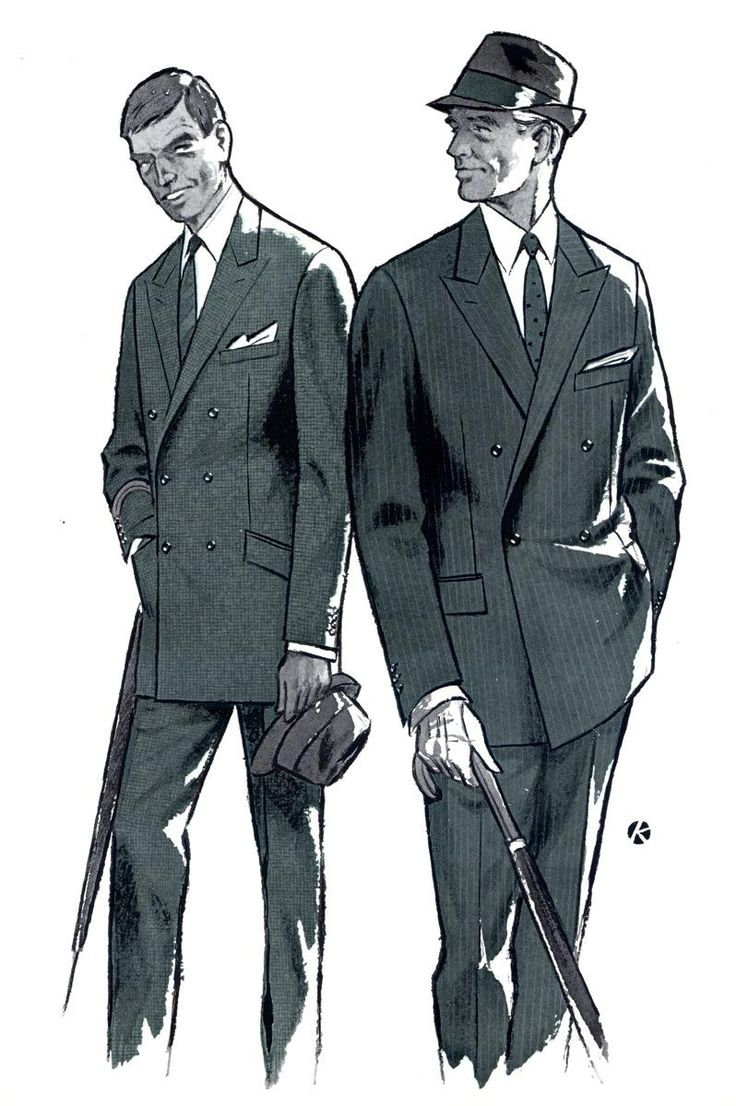 In the 1960s, they start sewing suit pants again without open pleats and cuffs, and the jackets become smaller and more compact than in the 1950s. The color shades of the fabrics are generally more subdued. Think of The Beatles’ suit. 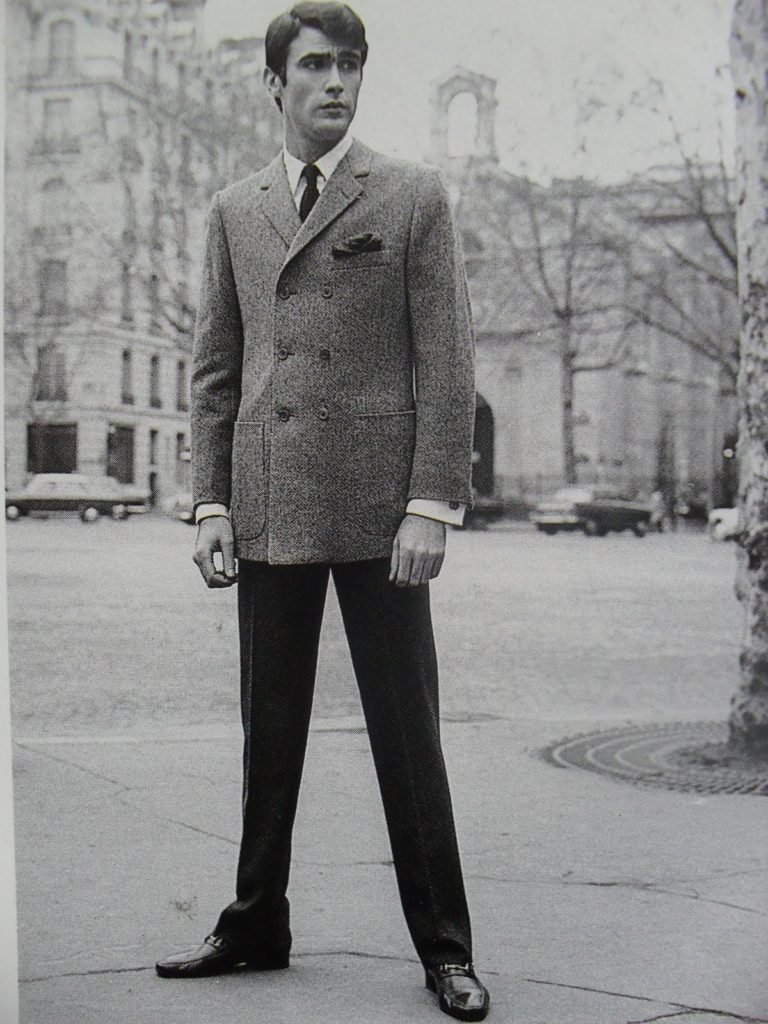 The tendency towards narrower and smaller continues into the 1970s. The colours and ornamentation of Carnaby Street set apart the 1970’s from the 1960s. However, in terms of the cut not much new is happening. The slim line continues. 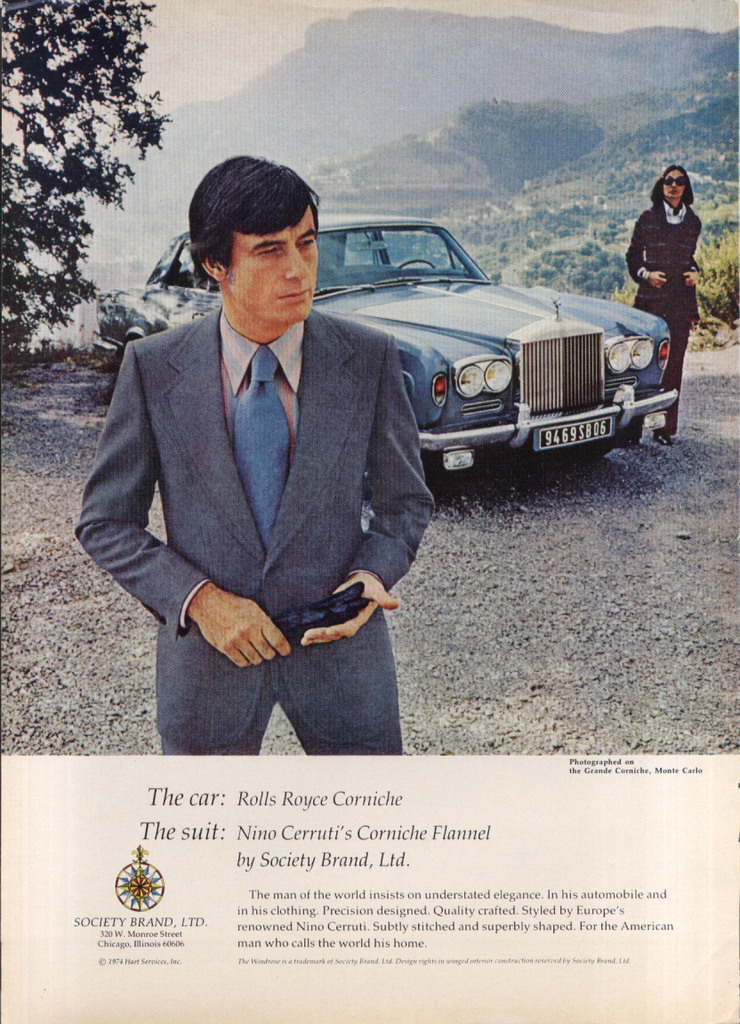 Giorgio Armani becomes famous at the turn of the 1970s to 1980s for his soft, unstructured suit. In fact, the cut is not that far from other 70s suits, but the soft tailoring and the fabric’s color shades are more subtle than the style in general in the 1970s.

In the latter half of the 1980s the infamous “power suits”, scions of the 1940s’ zoot suit, are born. Especially Hugo Boss becomes exponent, but Giorgio Armani also promote the oversized suit.

The suit is just big.

Then, the Austrian Helmut Lang and the American Tom Ford at Gucci begin in the latter half of the 1990s to send new styles down the runway. Especially Helmut Lang creates a significant new suit. His narrow suits trousers announce a dramatic change of the suit.

Hedi Slimane, designer at Dior, picks up the change, and at the beginning of the new millennium he brings on models in “skinny suits”, that is, low-waisted, ultra-tight pants and narrow-sleeves, tight-fitting jackets. The suit is black, the shirt is white and the tie is thin like a ruler.

The narrow and small jackets become “unstructured” with tissue paper thin interlining and all wadding is removed from the shoulder region. The suit jacket is nearing a sweater.

Suits 2015 and beyond – casualization

Now the Slimane style is about to become old hat. I think we can say the year when it went wrong for the style is 2015. At least there are many tendencies here and there that the suit will widening again. Casual impulses from streetwear and athleisure influence.