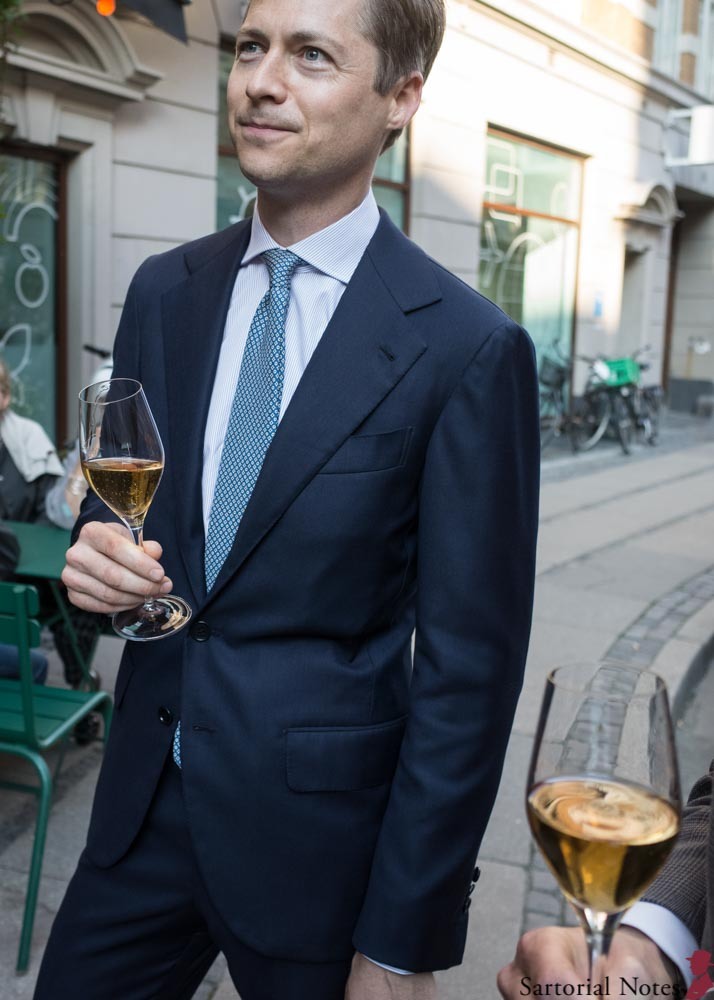 Like last year I gathered with a group of readers of Sartorial Notes. This time around we upgraded the event, and we went to Restaurant Palægade in the old part of Copenhagen. Kenneth, a reader, who imports the best American wine for fine restaurants in Copenhagen, including Geranium and Kong Hans, arranged the menu with Restaurant Palægade.

I had forwarded a dresscode stating “lounge suit” that most attendees choose to follow apart from Butler, who arrived in t-shirt and worn-out jeans. I know Butler a bit, he is player, so I expected it was a practical joke of his. Yet, he insisted that his ugly jeans were proper, and I had to deny him access until his was dressed in a lounge suit. After a while he gave up, and we could all sit down to a superb dinner. 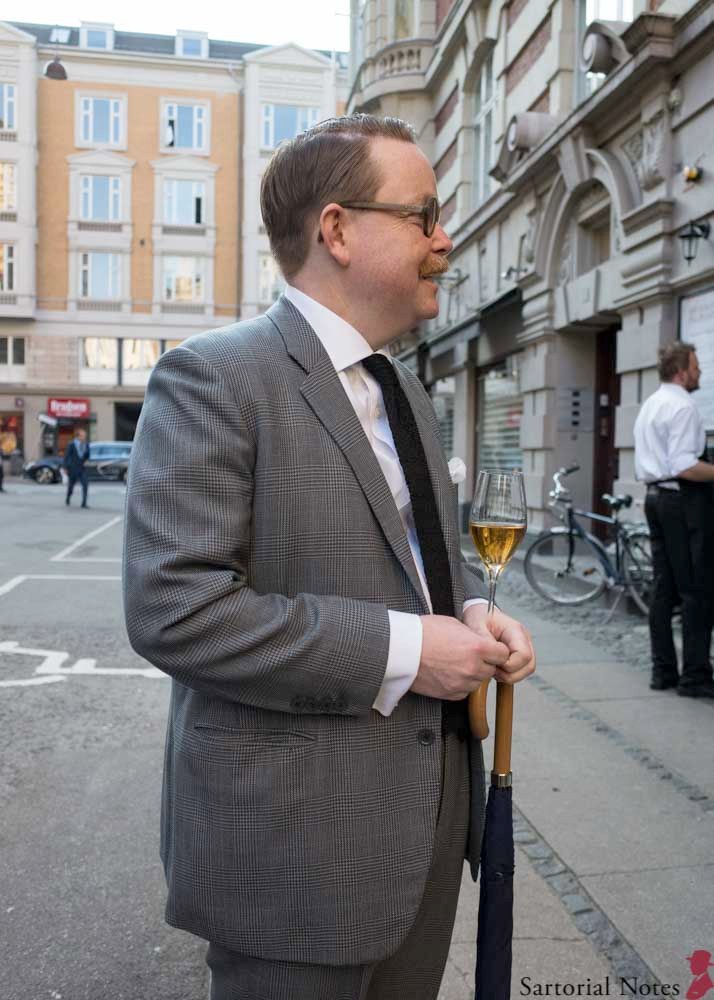 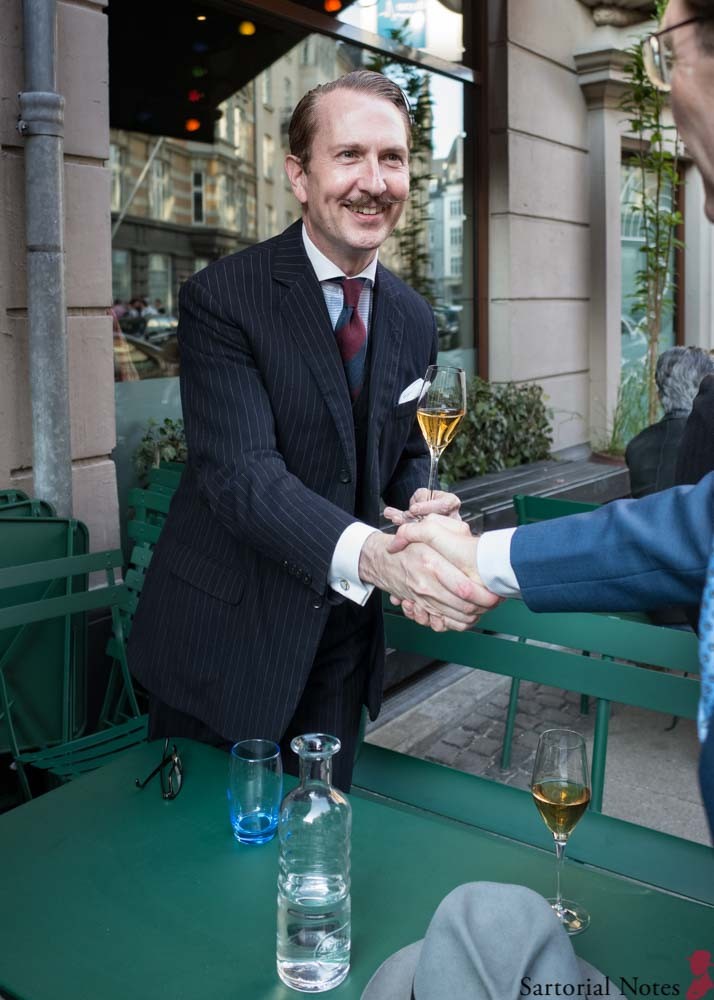 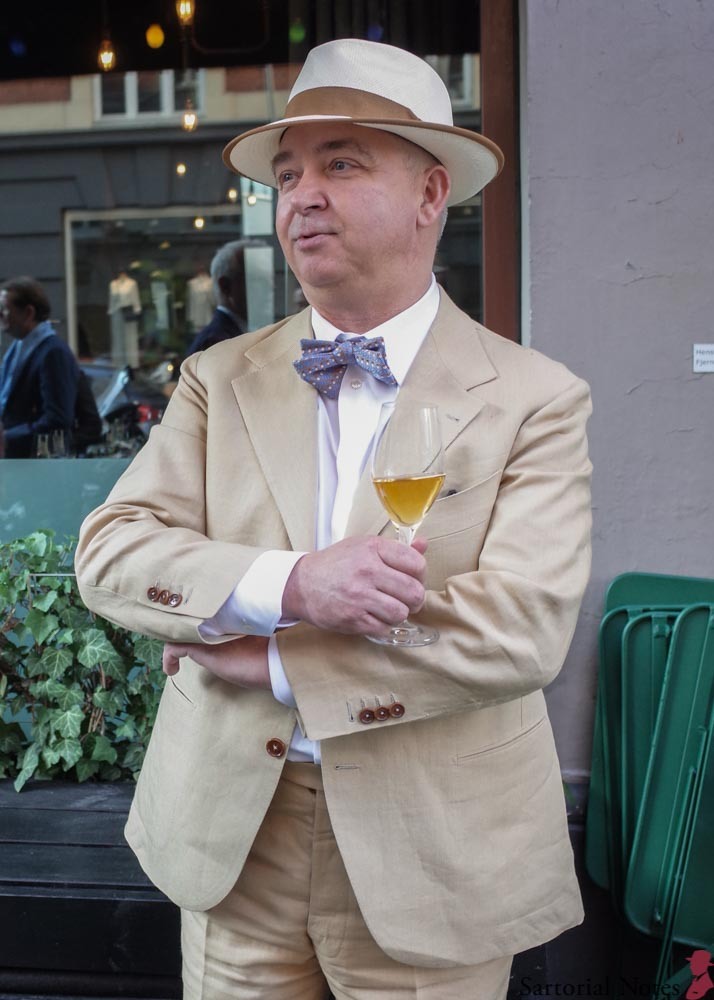 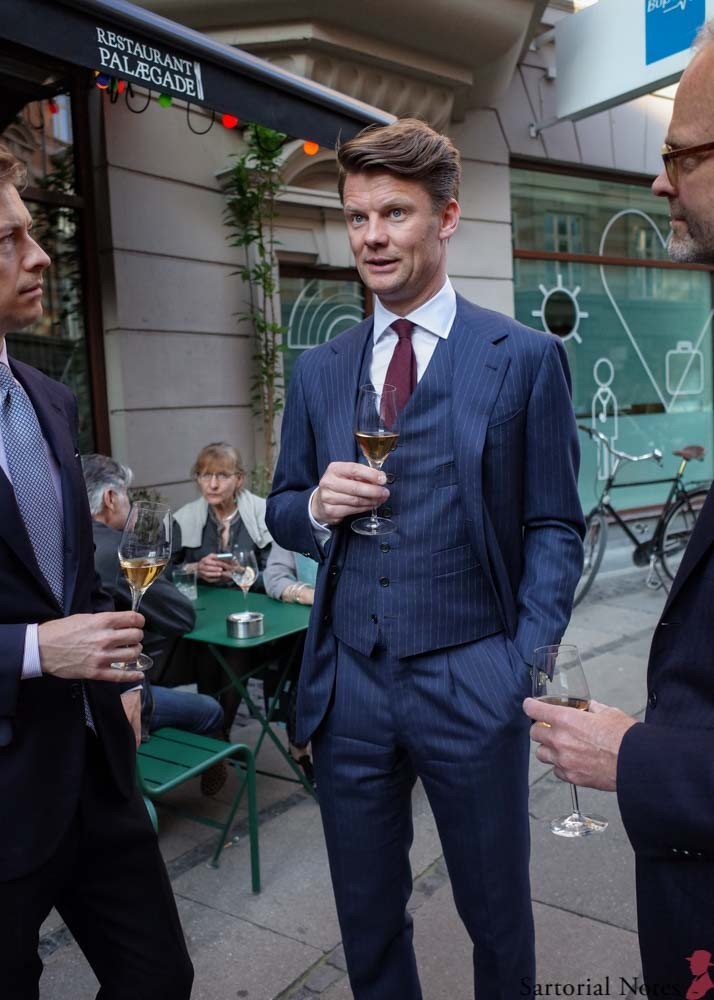 Jacob in a 3-piece bespoke suit from Guida. 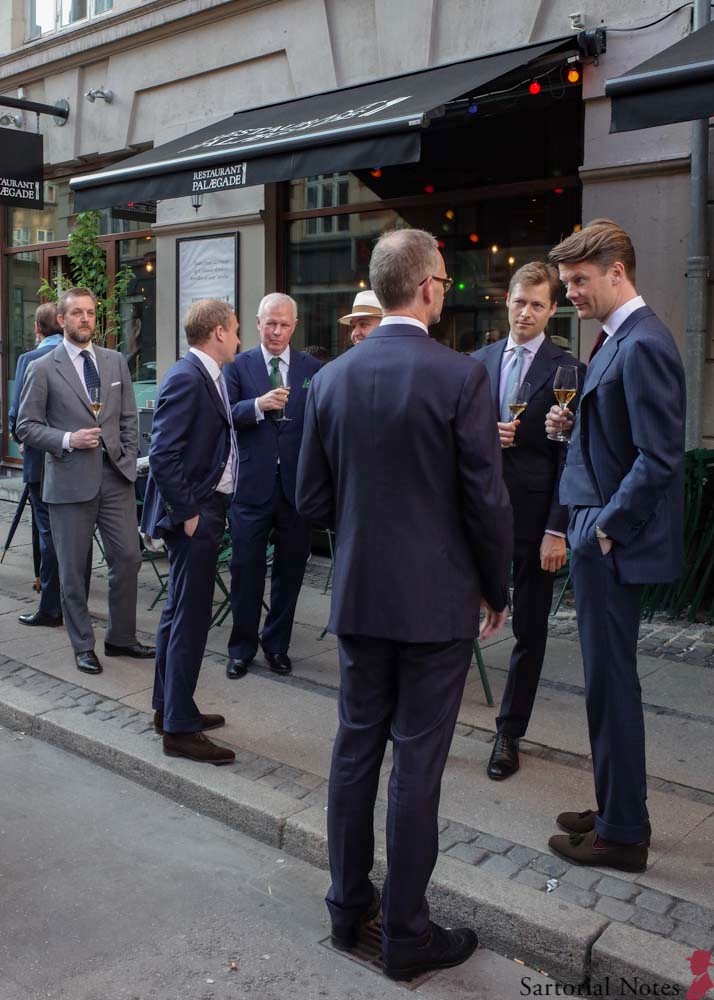 Disgorged sparkling wine for a start outside Restaurant Palægade. 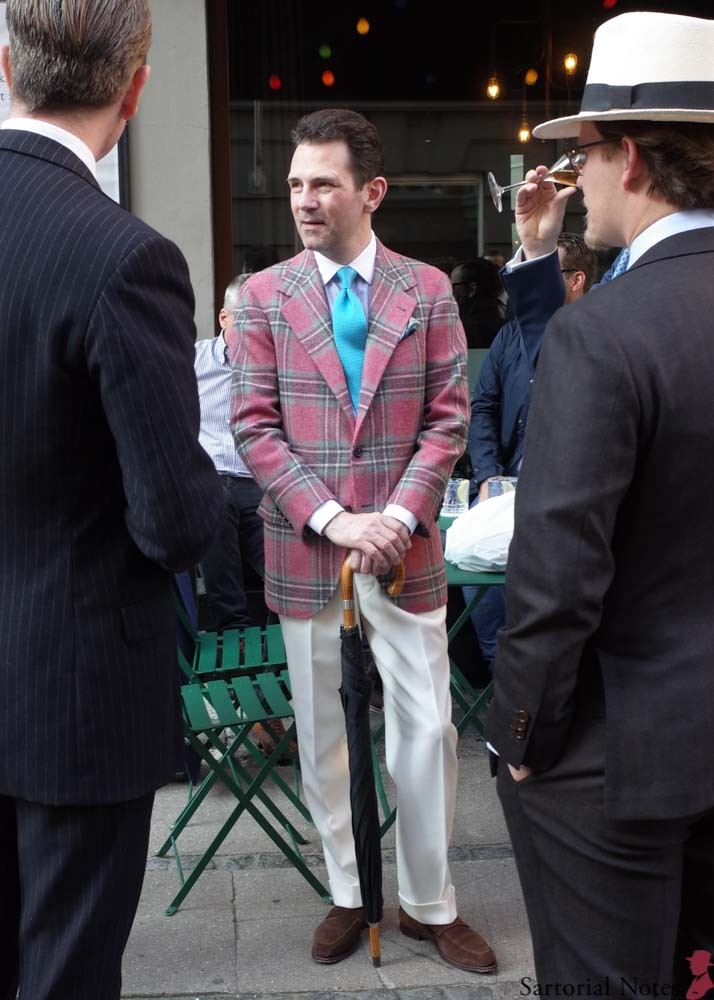 Iversen, the dandy, in a pink jacket by Francesco Guida. 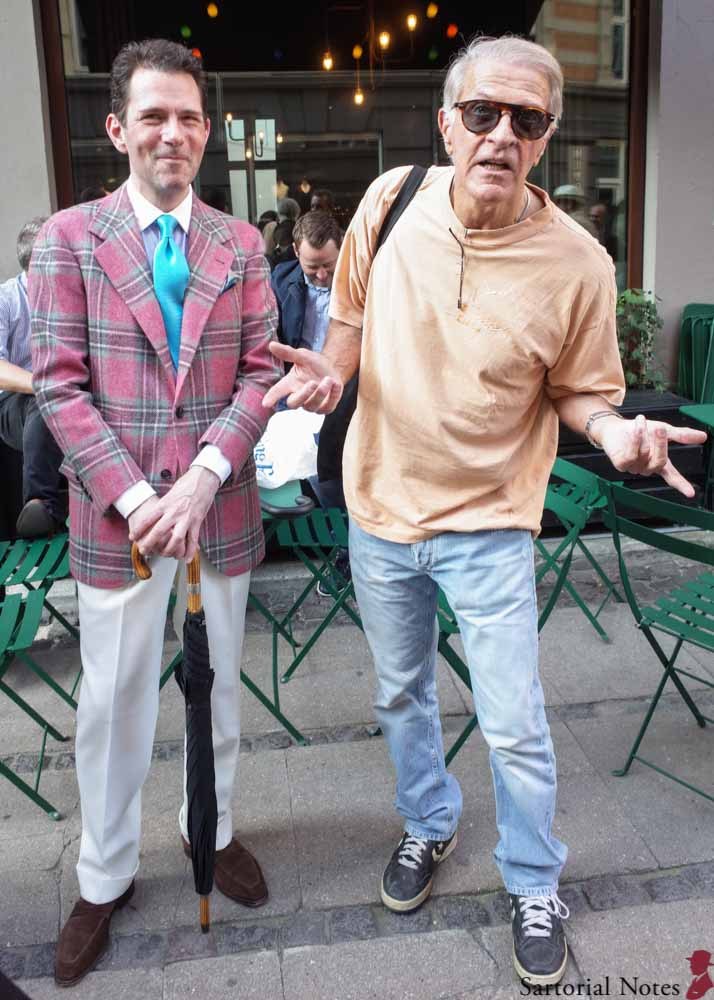 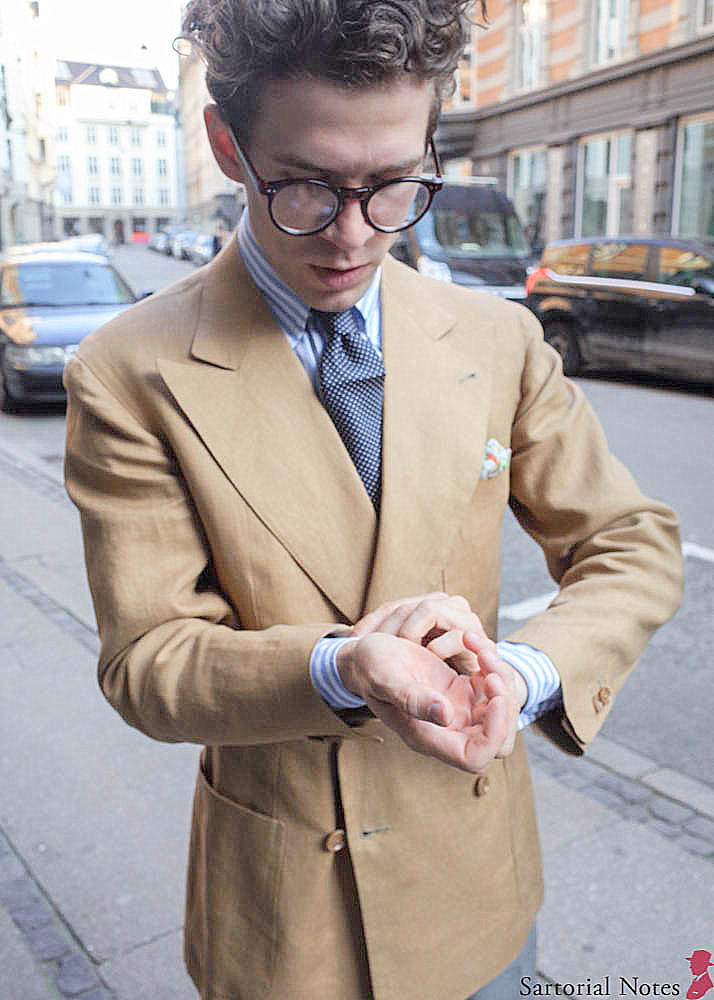 Jeppe in a bespoke linen jacket by Musella Dembech. 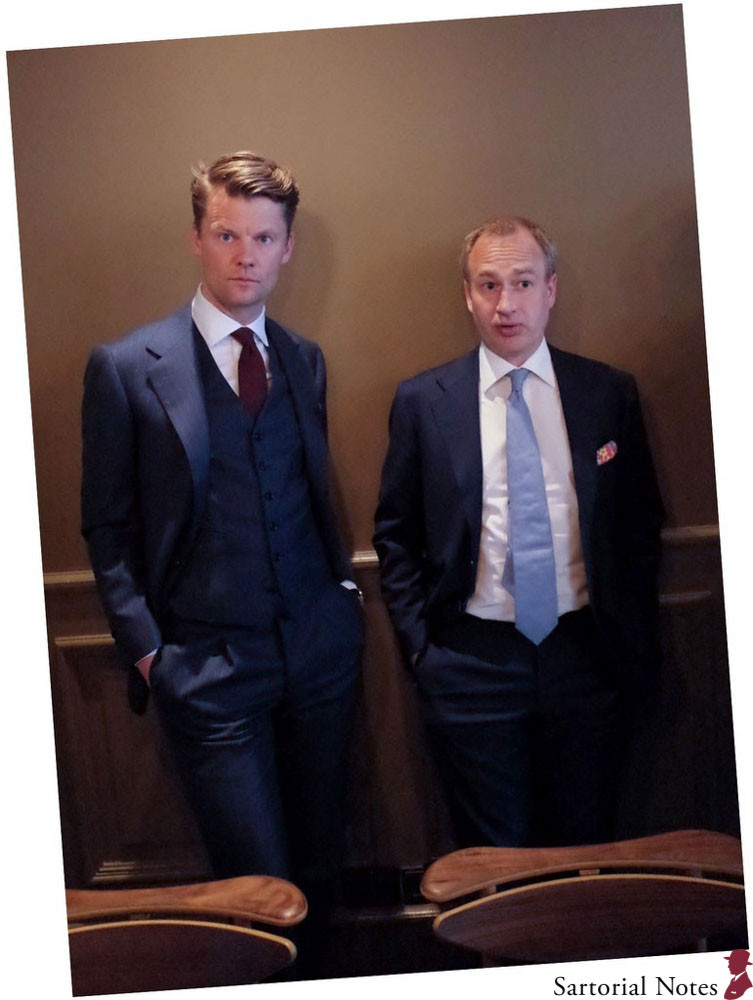 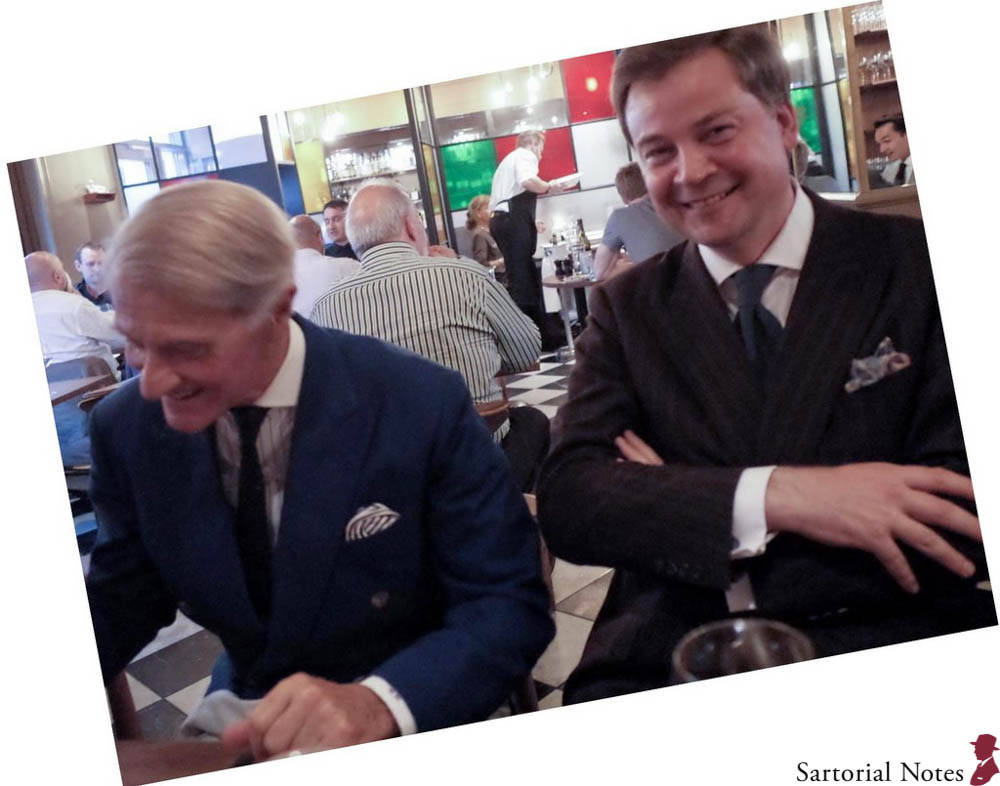 Butler and yours truly friends again. Butler in a Steven Hithcock suit. I’m in a bespoke suit by Volkmar Arnulf.

The wine we had 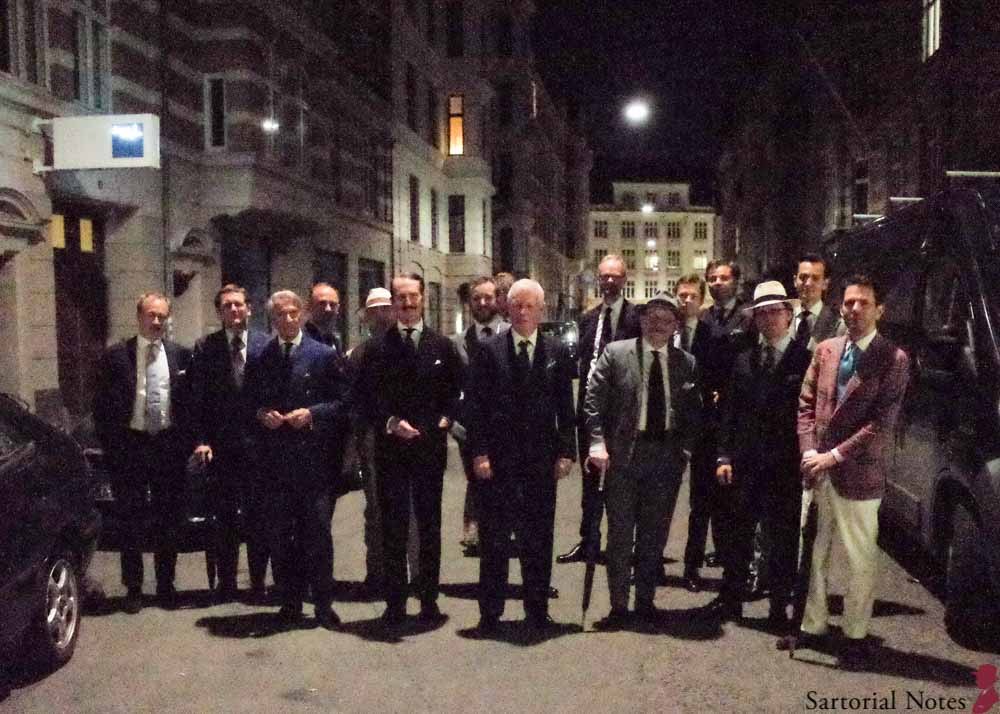 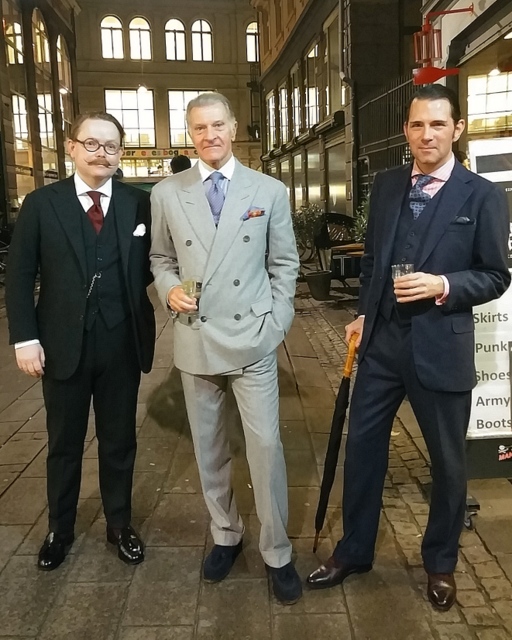 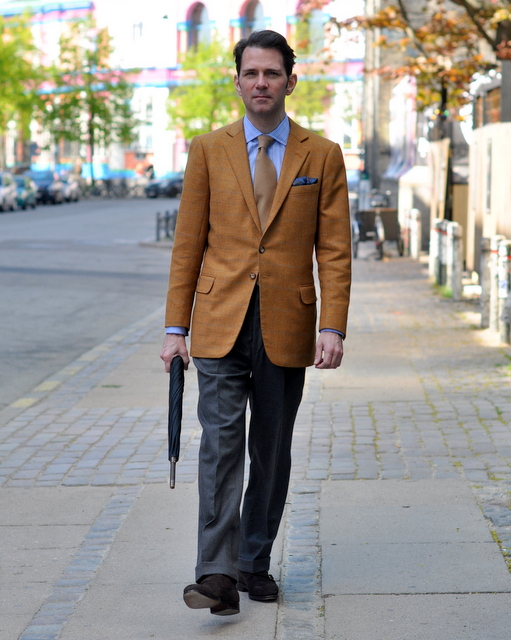 Tweed and flannel are associated with Fall and Winter. 100 years ago it was more murky. Flannel was a typical Summer fabric, and tweed was not uncommon during Summer. Corduroy, on the other hand, would be put away by Easter.

Today tweed and flannel will be stored by March or April usually, or when we pass 15° C (59° F). Personally, I have no problem with wearing a heavy tweed jacket in May, if cold weather doesn’t leave.

Above Michael in start of May. He is in a faux tweed jacket from bespoke tailor Peter Undén and classic mid-grey flannel trousers. In his right hand, an English umbrella, below, suede monks, and he has knotted an untipped wool tie from Grunwald. 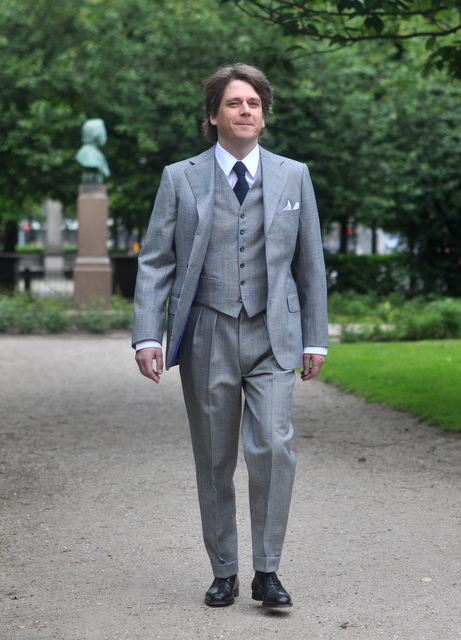 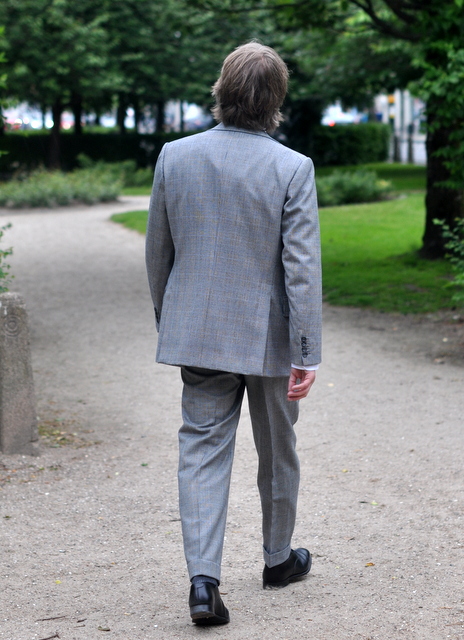 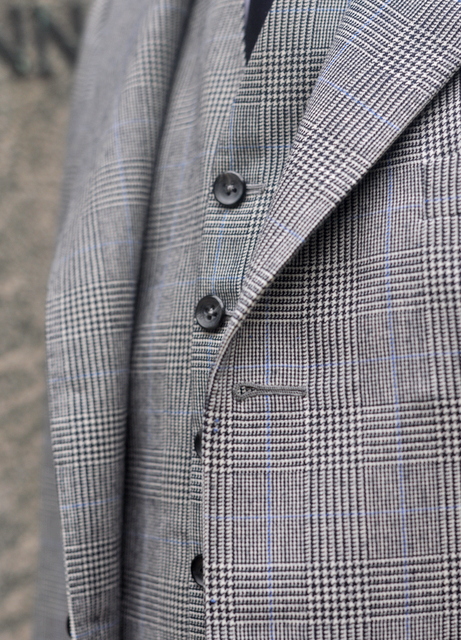 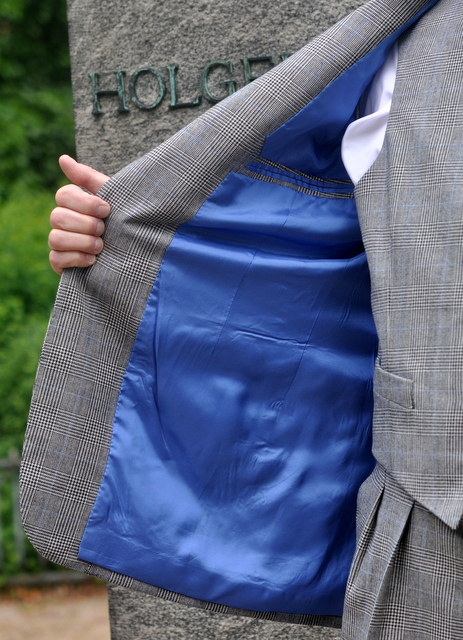 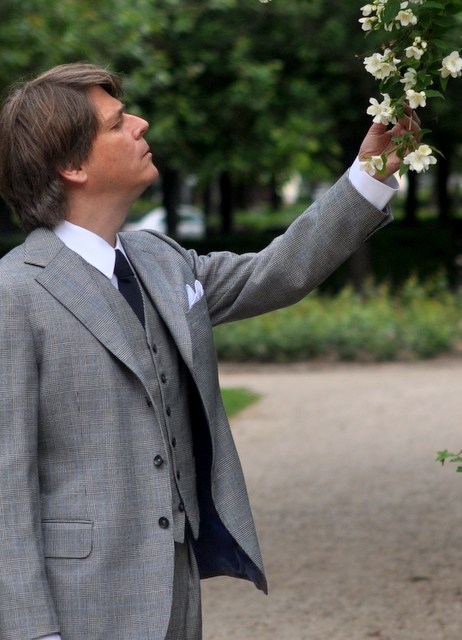 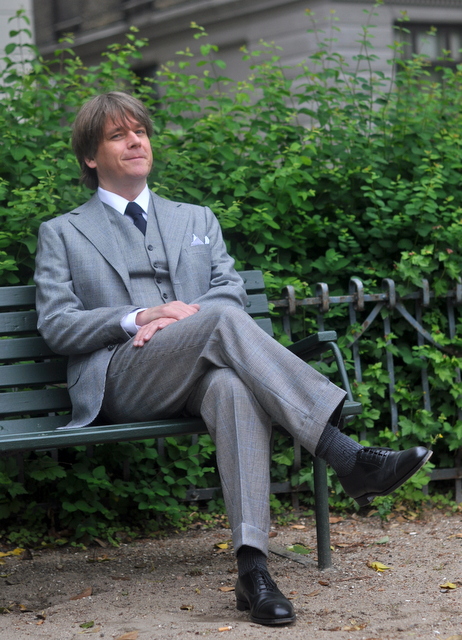 So, I have helped Peter Lund Madsen, brain scientist and entertainer, with ordering another suit from Peter Undén, solitary classic bespoke tailor in Copenhagen. We have added several small changes to his pattern making the suit more relaxed.

At the photo shooting,  Peter Lund Madsen arrived in a terrible shirt with cuffs about the size of the Holland Tunnel (Thanks, Tom). I guess it just has to be like that with a brain scientist. Anyways, the suit has become quite nice. I’ll keep an eye on, how it settles over time. 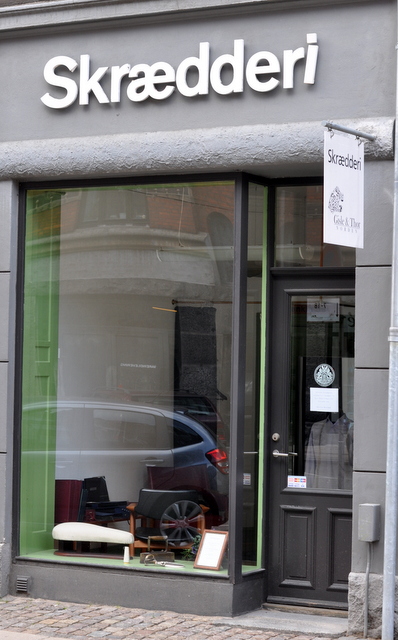 I stopped by a small bespoke tailor shop in Copenhagen. It is run by Gisle Larsen. He took over the shop two and a half years ago from Tobias Enk, who wanted to retire. Mr. Enk was almost 90 by then. A couple of months later, I heard that he had passed away.

Above, the new fine window of Gisle’s workshop. You may visit Gisle at www.skraedderiet.dk (in DANISH).

Below, Tobias Enk’s old, but charming shop as I saw it a week before he closed his business. 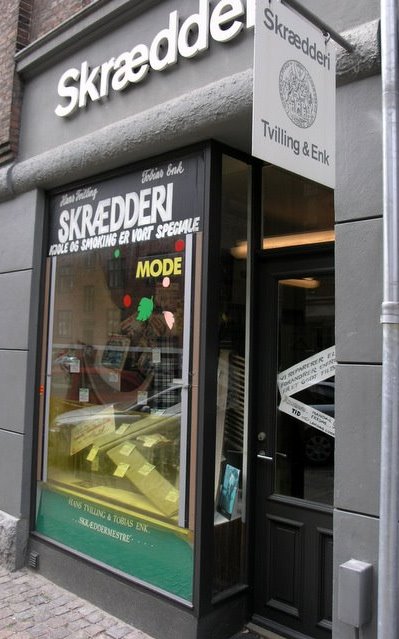 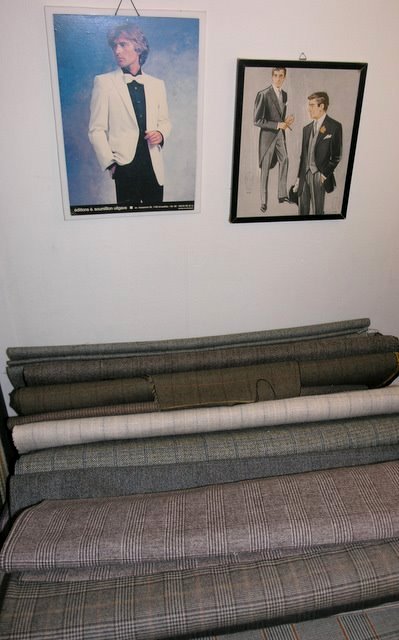 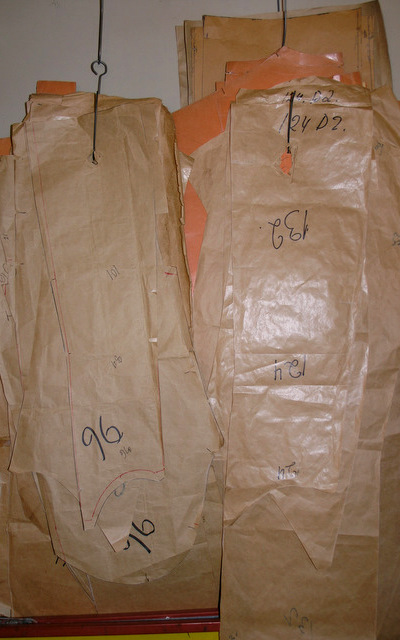 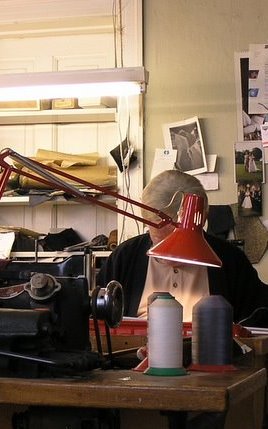 Photos/Source: The Journal of Style