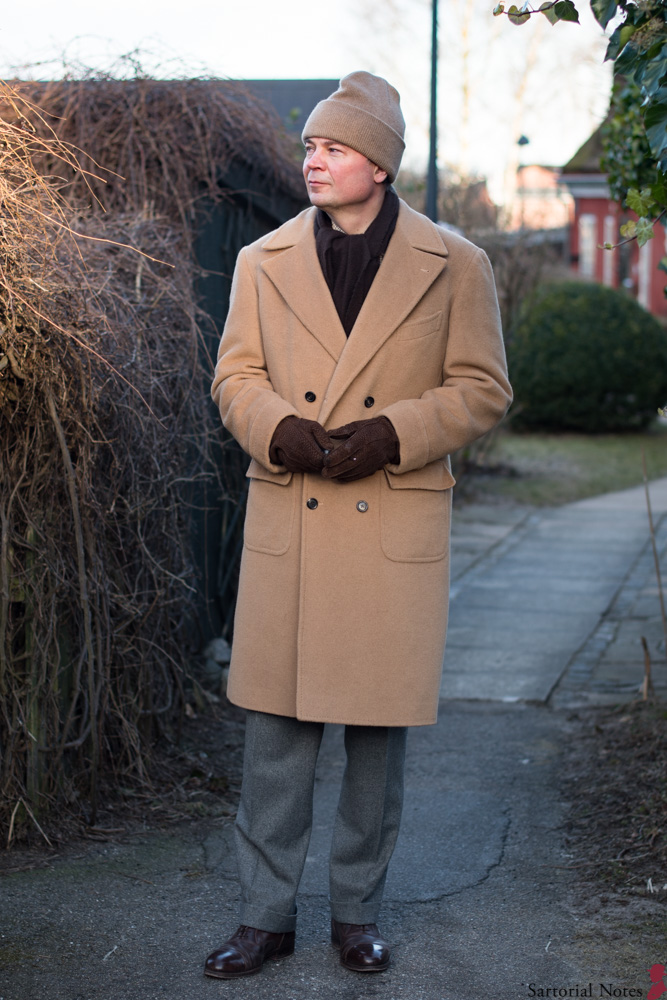 Winter won’t loosen its grip on Scandinavia. It’s quite annoying if it wasn’t for the situation that you can keep on nice, heavy overcoats like this bespoke polo coat by Francesco Guida. He cut it from a length of camel hair cloth that nobody wanted on the store.

I pair the overcoat with a tweed jacket, heavy flannels, shell cordovan shoes and carpincho gloves. The questionable knit hat is cashmere, afterall. 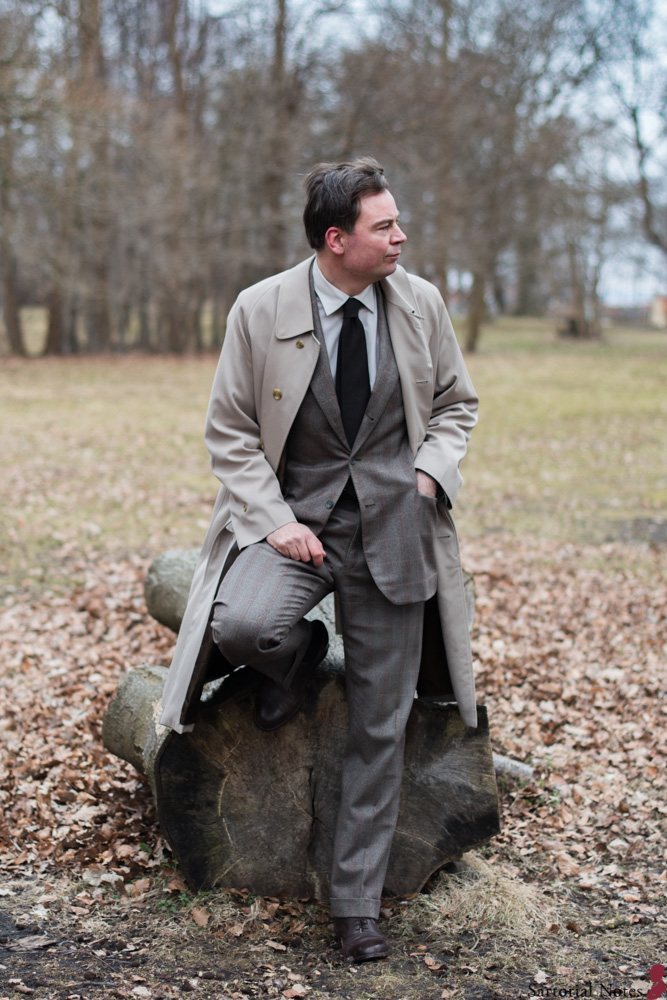 An old suit of mine from a now retired Copenhagen tailor has been on the hanger for a few years. The trousers have had a rip. A seamstress rapaired the trousers with a piece of fusing. It is not a very elegant or sturdy solution I have realized. However, they are strong enough for a photo shoot. The overcoat is a secondhand new Burburry rain mac in gabardine wool that I bought in Vienna. 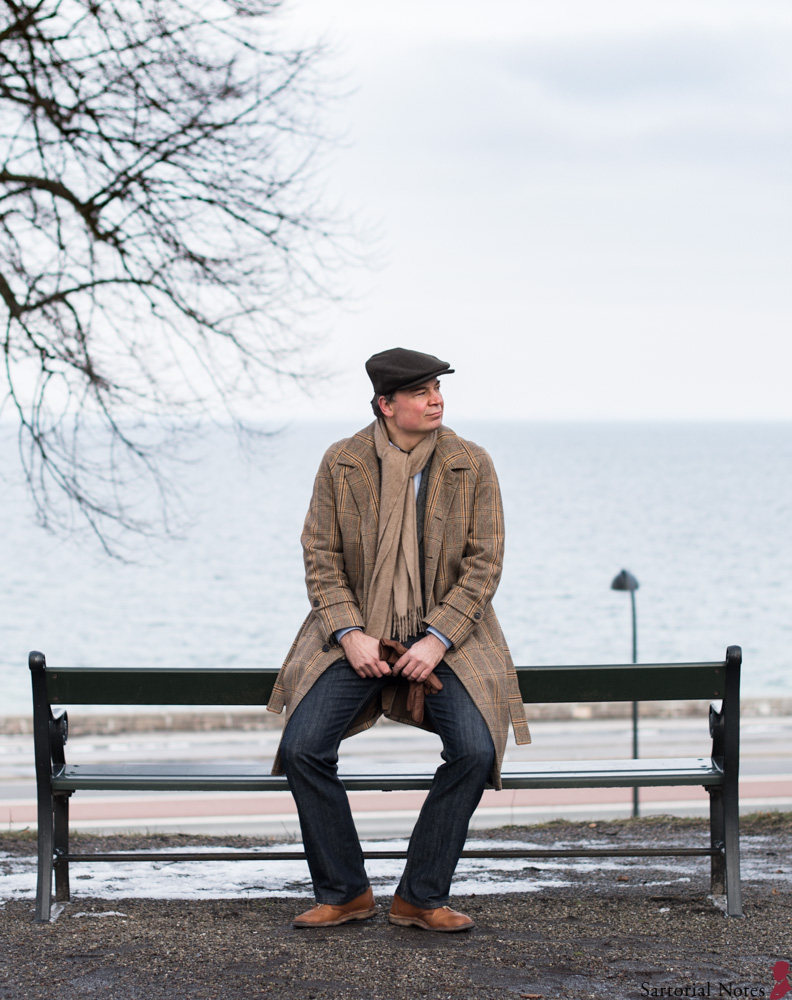 A couple of photos from recent weeks. As you can see I’m not good a very a very polished look, perhaps because I feel that I’m not perfect enough for that. Still, I need a haircut, I admit that. 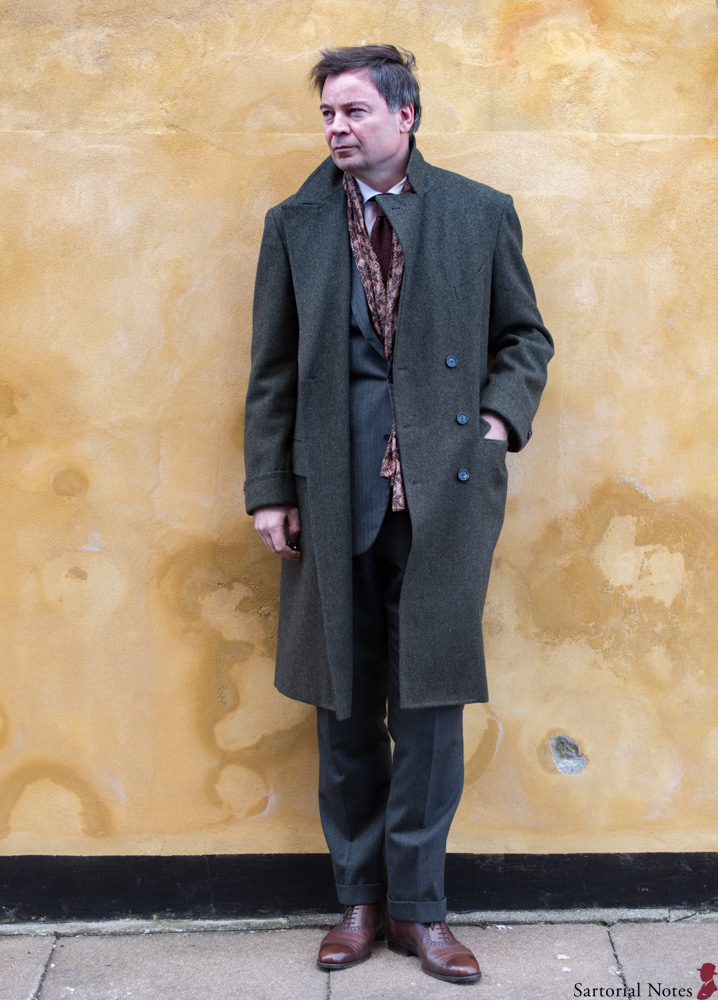 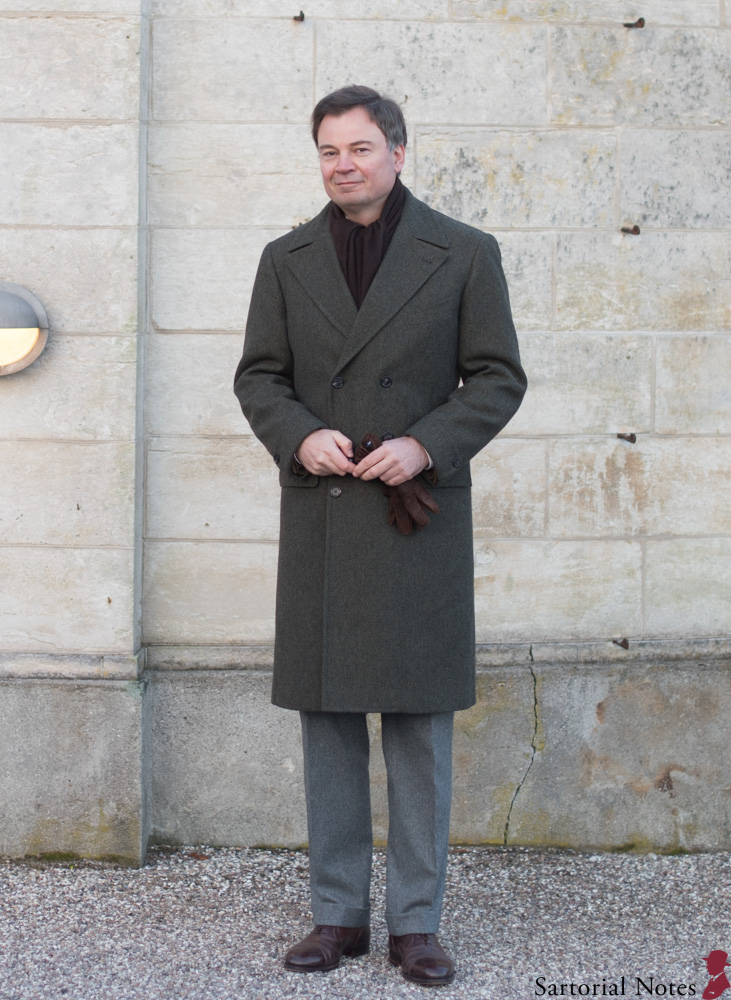 Isn’t that a nice overcoat?

It has line and flair. I think the mottled bottle green cloth (W. Bill) suits the guards coat design very well. Blue, grey, black or brown are perhaps more common choices for the design, but the bottle green shade works as well. 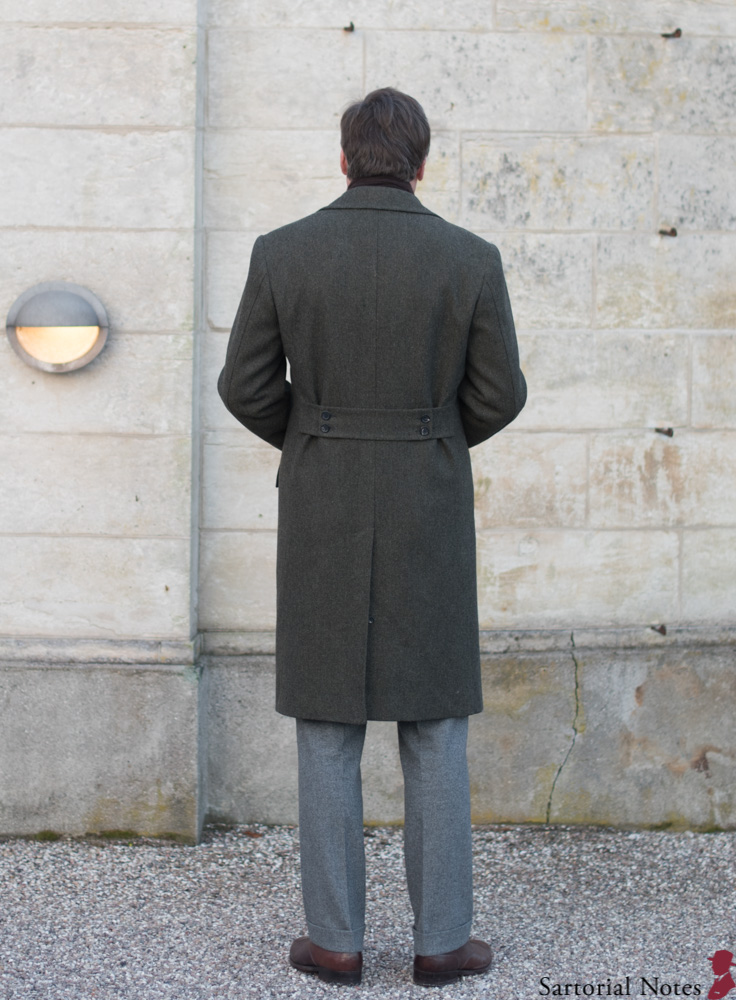 Only a blue suit would be a bit difficult to pair with the shade. Grey and brown harmonize with the forest green shade.

In the photo I wear the overcoat with grey trousers of vintage flannel from Fox Brothers. My shoes are made-to-measure shell cordovans from Kielman. The chocolate brown cashmere scarf comes from Begg. Merola has made the carpincho gloves. 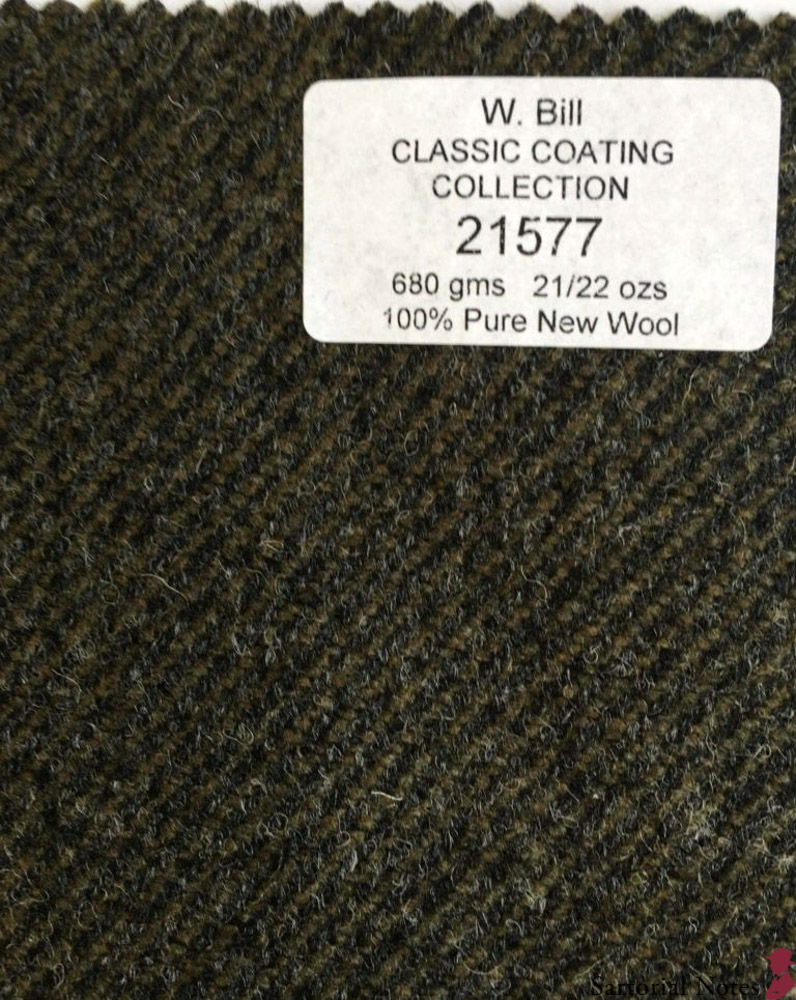 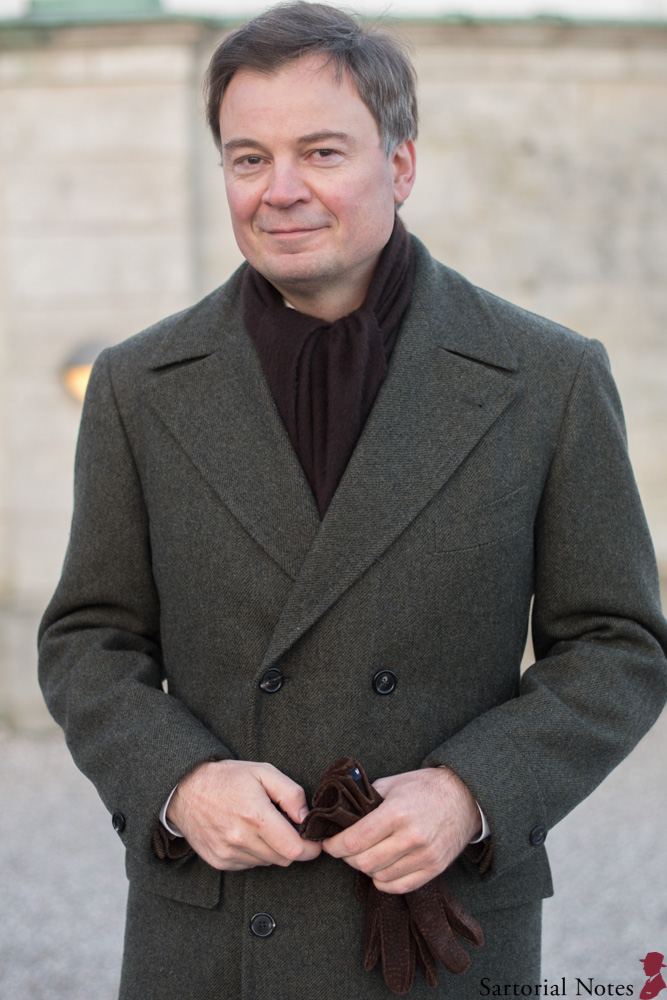 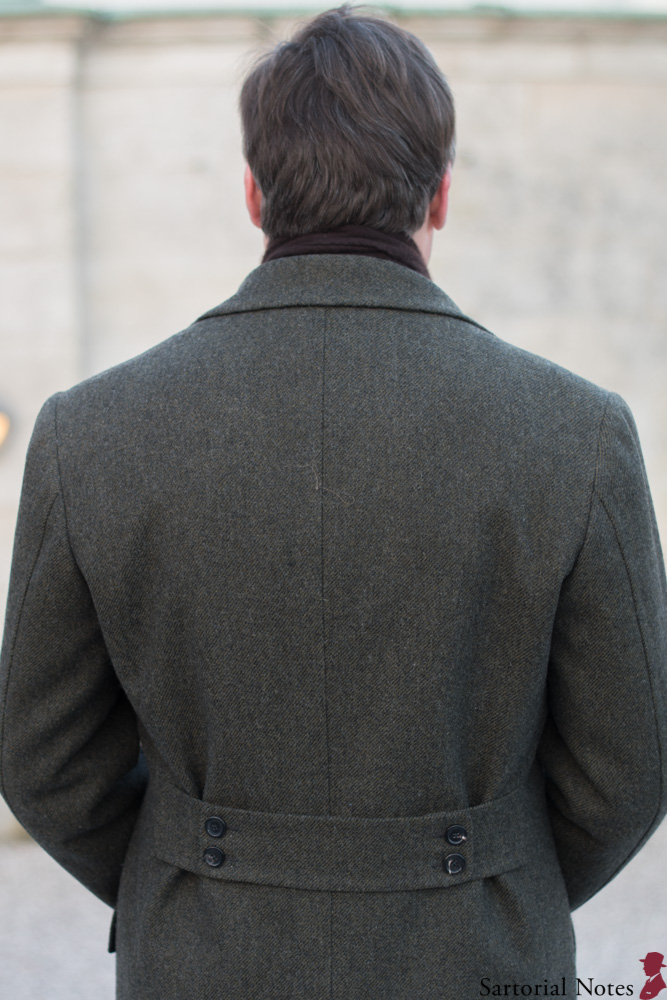 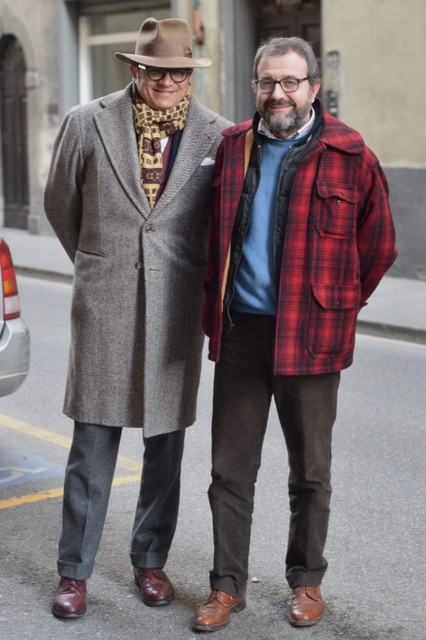 It was, not surprisingly,  the attire on the left, which caught my eye. The combination of dark red derby shoes, mid-grey flannel pants, light-grey herringbone overcoat, yellow foulard scarf, navy blue jacket, wine red vest and felt hat is unusually elegant street style, even in Italy.

That said, the friend on the right is not a bad dresser. The style is more casual and more rough but the parts correlate well. The lumberjack coat, the down vest, the blue knit pullover, the brown moleskin trousers, and the cognac coloured welted leather shoes form a harmonious whole.

Photo:  The Journal of Style 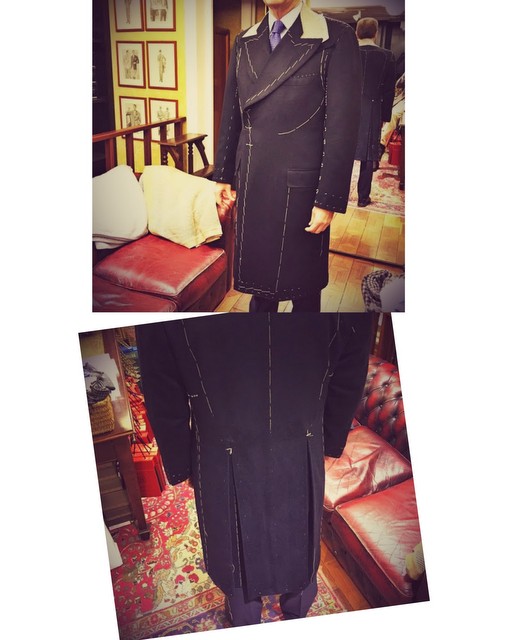 In September a reader  ordered a formal cashmere overcoat at Sartoria Ripense in Rome. He got his inspiration from an old Esquire image (see below). Esquire describes the overcoat as “a paddock coat”, but it is perhaps closer to a Victorian frock overcoat. The mysterious Sator has claimed that. In any case, the overcoat is impressive. 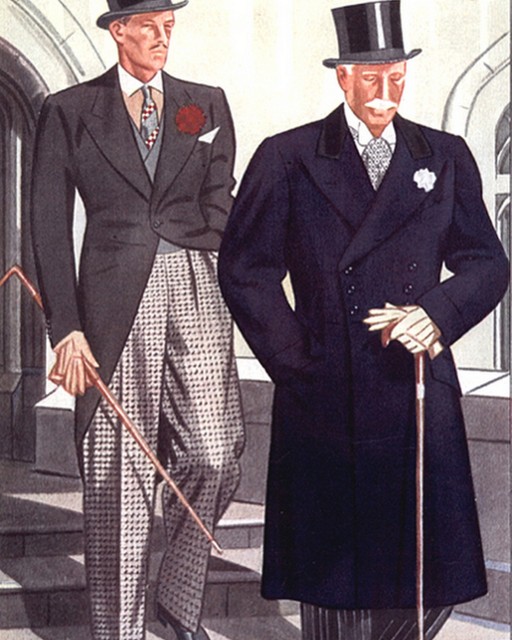 The reader wrote to me:

You may have noticed that I did not show up at the party at Mr master tailor Peter Undén. It is not due to lack of desire, but just the fact that we are some, who take the classic wardrobe seriously! In other words, we do something about it, while others have fun, drink and enjoy themselves 😉

For several years I have dreamt about realizing the ultimate elegant formal overcoat. In my humble opinion that is The Paddock Coat as shown in the Esquire image.

In September I presented the project to my tailor, Andrea, who, despite a declared love for tailoring of the 1920s, had never been near a similar task. He agreed, though, after a long and loud discussion with tailors in the basement. 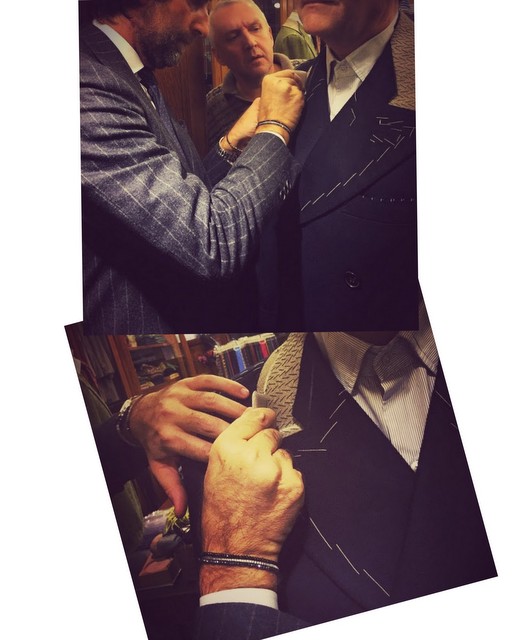 “When you come in December, I believe that you can have it with you home, if you can stay for three days,” Andrea told me. 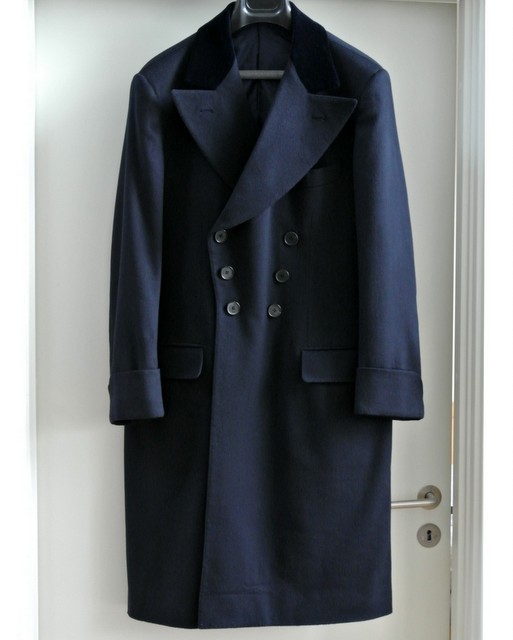 I came back in December, and I went to the final fittings. Andrea kept his promise. They made the coat, and what a marvelous coat, I must say. ”

Photos: Ripense & The Journal of Style