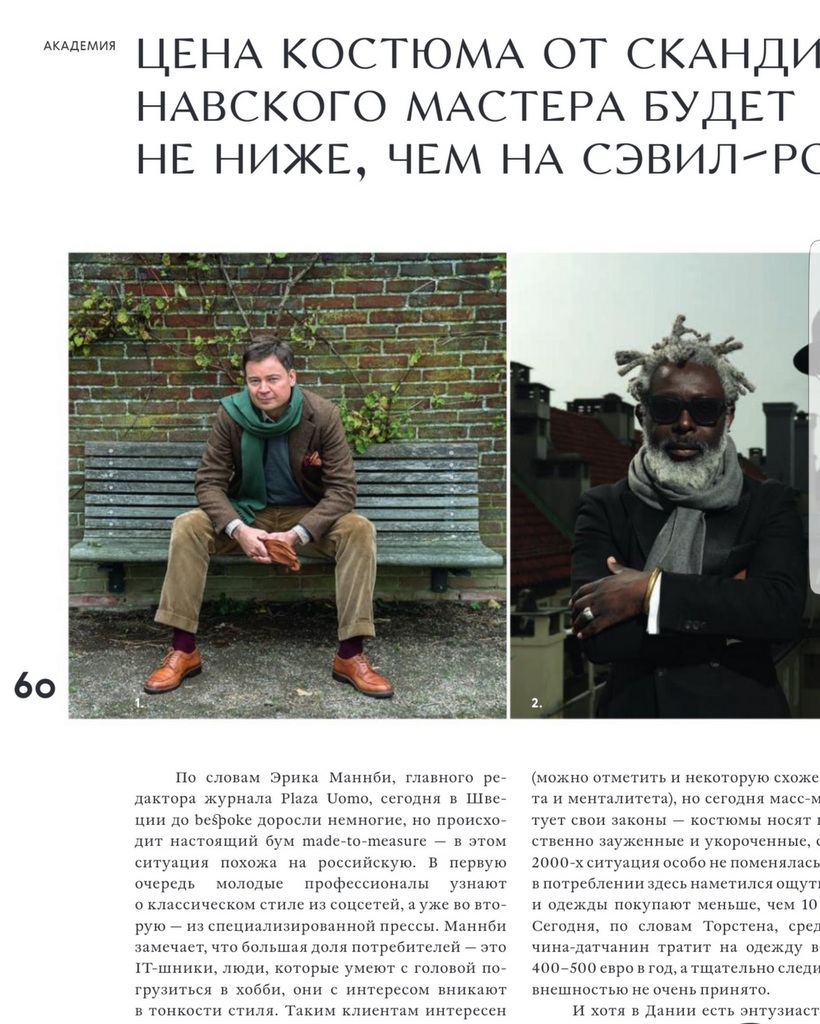 The state of menswear and bespoke according to the man on the left in the September issue of The Rake, Russian edition.

Interview about the state of menswear

The Rake, Russian edition, had a chapter on sartorial voices in Scandinavia in their September issue. I was interviewed for that. The following is from the interview.

Style and brands in Denmark

Men’s style in Denmark tend to be less formal than in the larger neighbour countries Sweden and Germany. The leading city style could be defined as a civilized street style of an oxford shirt, chinos and (white) sneakers, and sometimes a softly constructed Italian jacket with a handkerchief in the breast pocket. Suit wearing men, which are to be found in corporate business primarily, will often omit the tie today. They will wear black shoes mostly. Traditionally, the Danish man in a suit would look at English style for inspiration. Today most suits sold follow the slim skimpy ligthly padded Italian line. Names like Pal Zileri, Corneliani, Zegna, and, of course, Armani and Hugo Boss, are well known.

Revived interest in crafts and quality

If we look at the larger picture, clothing could be about to fall out of fashion. I saw numbers from Denmark that showed that we spend significantly less on clothing today than 10 years ago, although spending in total has surged.

However, there has without doubt been a revived interest in crafts and quality for the last 10-15 years. You see that in the time and money spent on fine cousine, wine, locally crafted beer, connaisseur liqueur, and mechanical watches.

The state of menswear in Denmark

I also think we experience a turn to quality in suits and classic wear. But it is more subtle, not as strong. In 1990s not a single suit customer would ask, if a jacket was fused or had a canvas construction. Neither would he ask, if the shoes were goodyear welted. Today a shop sometimes face those questions from eager young men informed by the web.

That being said, you meet a fair amount of men, who are prepared to buy a lot on fine menswear, including bespoke. Moreover, I believe the group has grown in the last 5-10 years. However, I have not seen figures on that.

On the supply side young craftsmen, for instance tailors, appear, but they fight to survive. The apprenticeship system is non-existent, and Danish production costs mean that a Danish bespoke suit end up costing like a Savile Row suit. Men who will pay those prices might often go to London because of work, so why should they buy a bespoke suit by a lesser skilled Danish tailor?

There is also the Italian option, which more men have discovered. I bring a very skilled Italian tailor to Denmark myself for my blog readers.

The future of bespoke suits

When it comes to the future of fine menswear and bespoke, I think we can attach some hope in larger societal movements such as a call for sustainability and circular fashion. A bespoke suit fits that development of slow fashion very well. On the other hand, a lot is going on in terms of fabric research and technological development that doesn’t favour classic tailoring. I mean, in a decade or so you might be able to 3D print your own clothing. It will be exciting to follow. The state of menswear will change. That’s for sure.