A fashion historian noticed that we haven’t seen anything new in fashion from the punk style of the late 1970s onwards. Ever since fashion has been repeating itself.

The popover shirt made me think of the anecdote. The popular popover is in fact a very old shirt design, which comes back in fashion on a regular basis.

The role of the popover as being a fashion exception, not a standard shirt, began in 1871, when the shirtmaker Brown, Davies & Co i London patented a new men’s shirt:

“By the 1850s, tailors were applying their pattern drafting systems to shirts and tailors and other producers strove to introduce developments that made their shirts closer fitting and more comfortable. Patterns for shirts were included in magazines aimed at men such as Devere’s Gentleman’s Monthly Magazine of Fashion and The West-End Gazette of Gentlemen’s Fashions, as well as trade journals such as The Tailor and Cutter.

In 1871, London shirt-maker Brown, Davies & Co. registered a design for “The Figurative Shirt”, which buttoned all the way down the front, removing “the old and objectionable way of putting on the shirt by putting it over the head” allowing “the shirt being made to fit the person both in width of the body and in the armholes.” For these reasons, Brown, Davies & Co claimed this design of shirt was “more comfortable than shirts of ordinary construction.”

By the mid-1890s the “coat-shirt”, which had already proven popular in America, was being increasingly adopted across Europe.” [The Story of Men’s Underwear (2007), by Shaun Cole]

Probably, the most famous bearer and reference of the popover shirt is Gianni Agnelli. The photo of him in a white popover with Jackie Kennedy on his side on the Amalfi coast in the summer of 1962 not only stimulates the imagination of a romance between the two. The photo has also made the popover a classic in the history of menswear.

The typical popover has long sleeves. Unlike a long sleeved polo shirt, which strictly speaking should have a rib knit collar, the popover in the Agnelli tradition carries a soft shirt collar of the same material and weave as the rest of the shirt. 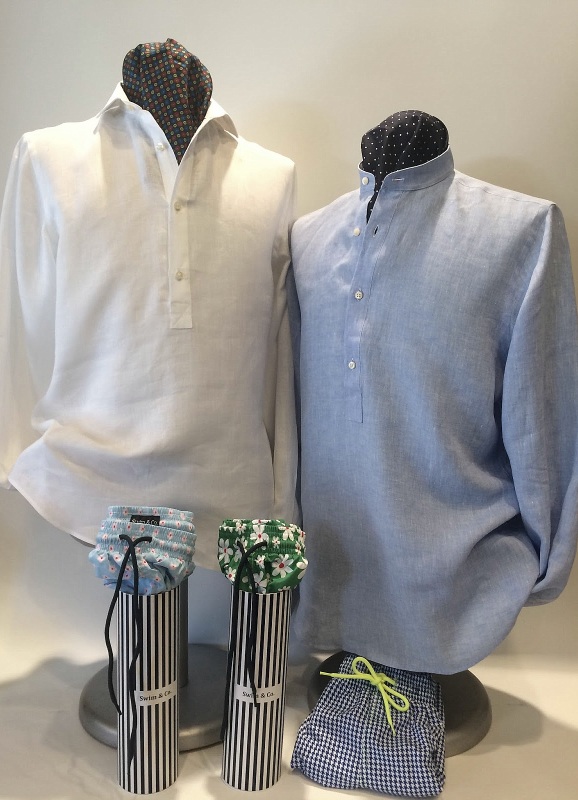 Popovers from the shirtmaker Burgos in Madrid. The one on the right with a nehru collar.

Shirt material, again in the Agnelli tradition, will be jersey. It is slightly more flexible than pique, the typical fabric for polo shirts. Linen, chambray and voile are fabric options as well. They all have some texture, which fits the suave casual nature of the popover. 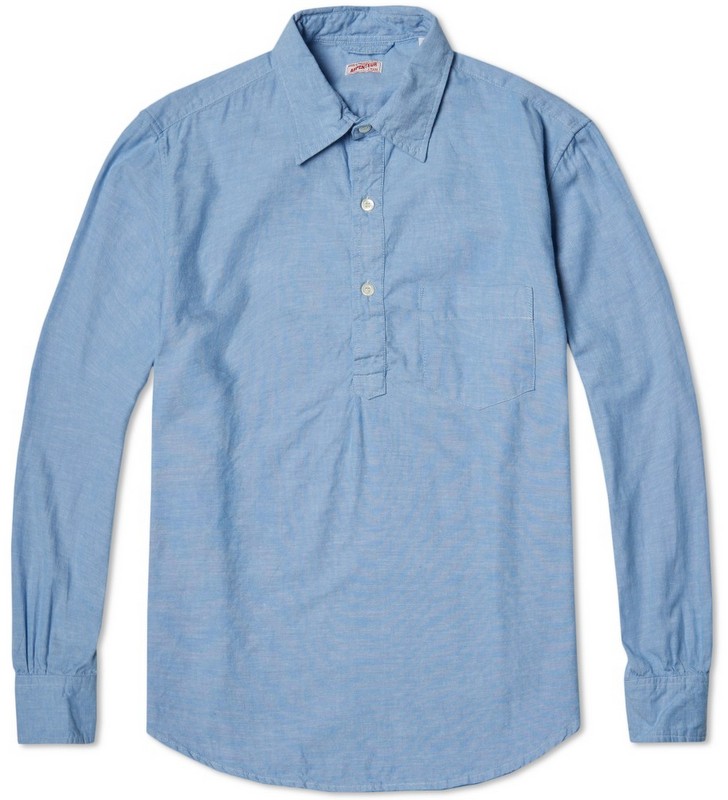 How to Use a Popover

History has casted the popover as a casual summer shirt. You can pair it with chinos, jeans or bermudas, a knock about sport coat, and loafers.

In a more formal poplin fabric I suppose the popover shirt can substitute a business shirt, although I have a hard time seeing it with a necktie.