Numerous authentic country garments and fabrics are designed by city people or city minds. Scottish Estate Tweed is a striking example of this, and if we speak of Nordic knits, we see a similar construction at work.

The history of Nordic knitting is, of course, very old. The wives of fishermen and farmers have been knitting underwear, jumpers, mittens and hats for centuries.  However, the peculiar garments, Nordic knits for men, which are branded as the real stuff today, are often rather new. 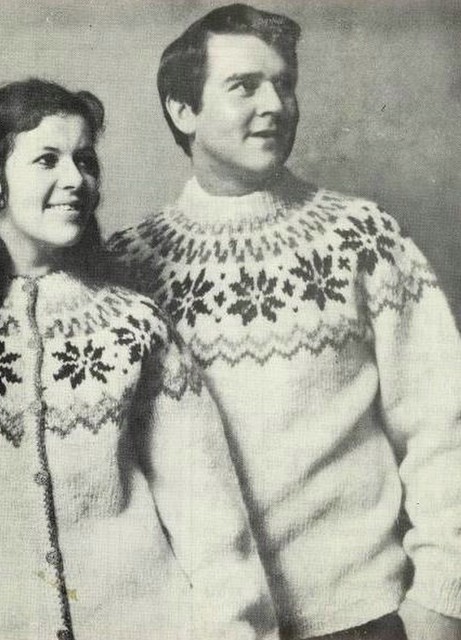 The Icelandic sweater of undyed wool 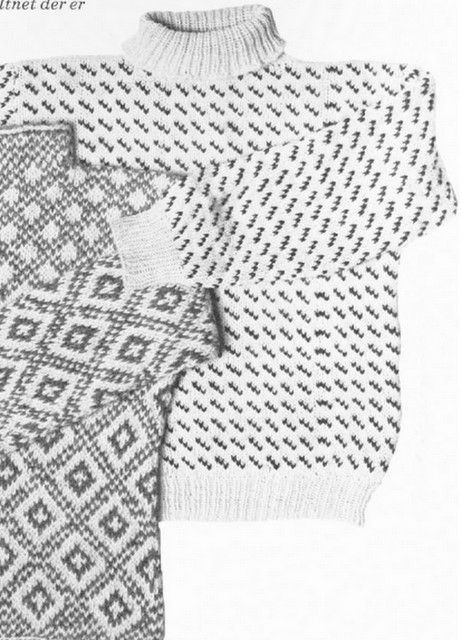 The most famous sweater of the North, the Icelandic sweater, or the lopapeysa, is no exception. A type of sweater, which has a pattern that runs like necklaces on the upper part, is popular to define as the classic lopapeysa nowadays, although the pattern is a post WWII invention. Some even claim that the Icelanders have copied the pattern from Greenland’s national female costume, which looks plausible, if you compare the two patterns.

Rather than patterns you should note the greasy Icelandic wool, the unspun airy yarns, the austere colours and the plain execution to get close to the nature of Icelandic sweater.

“The Icelandic sweater denotes a sailor and work jumper knitted from rough yarns in wool of two, or three at most, natural colours, and in a simple design,” Vibeke Lind writes in her comprehensive book Strik med nordisk tradion (1982).

And, we should not dismiss The Danish Dictionary. Afterall, Iceland was a Danish colony until 1944 🙂 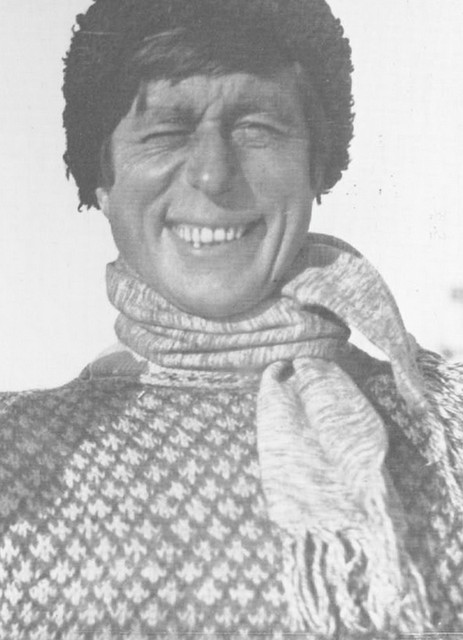 For my part, I will include a rollneck in the definition of the Icelandic sweater. However, I find no heavy historical support for my view. Crewnecks are allowed, although a photo like this of Knud Rasmussen, polar explorer, from 1921, gives a vote to the rollneck. 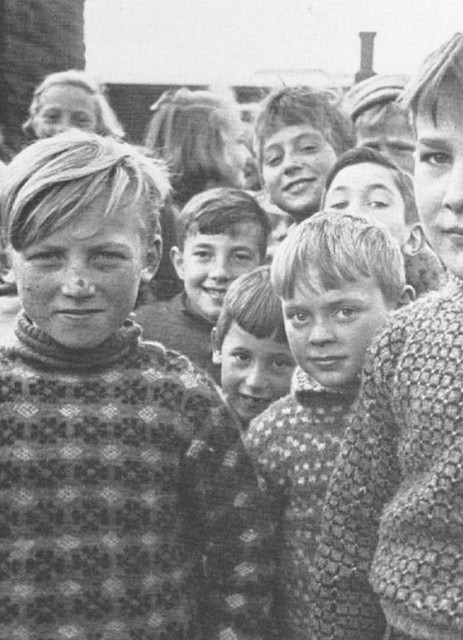 Children on Faroe Island in the 1950s in Nordic knit sweaters.

The Faroe Islands share the thick sweater in greasy wool with Iceland. The picture above from 1950s of Faroese school children tells the story. In fact, the Icelandic sweater could have been called The Faroe Islands Sweater as well, if wasn’t for another sweater, which is special to The Faroe Islands, that is, the solid brown sweater with metal buttons on one shoulder. 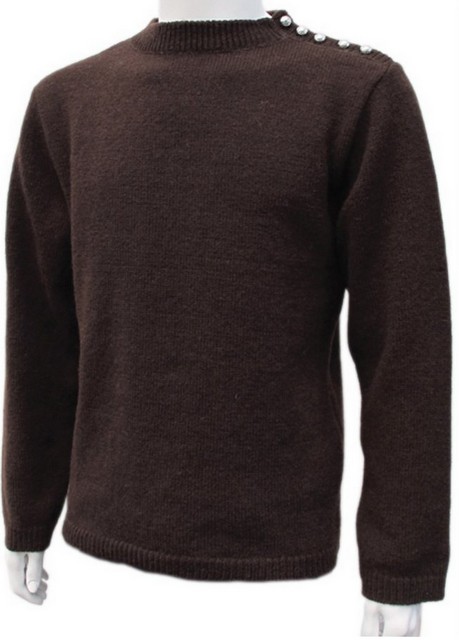 The solid brown sweater is knitted in finer yarns than the patterned Icelandic sweater. It is used on the sea too but a Faroese tells me that it probably originated in the country side, which explains, why it is made as a finer knit and doesn’t have a protecting rollneck.

If you turn to the Scandinavian Peninsula, the Norwegian sweater appears. It comes close in fame to the Icelandic sweater among Nordic knits.
The lusekofte, as the Norwegians call it, is a knitted jacket, originally. You close it with small buckels. Lus means lice referring to the small v’s in the pattern.

Later, the designation lusekofte has come to cover sweaters as well. 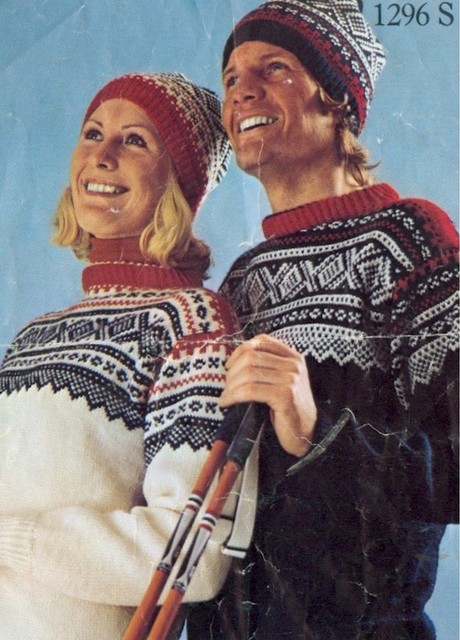 In the wake of the movie Troll i ord from 1953, a specific version of the lusekofte sweater became very famous signifying the classic Norwegian sweater today: Mariusgenseren, The Marius Sweater.

Controversies exist about, who is the real creator of Mariusgenseren, but the honour goes to Norwegian designer Unn Søiland Dale. She based the design, the story tells, on old Norwegian knitting patterns, among them lusekofte patterns. Timing it with the movie launch, she sold the pattern to Norwegian knitting company Sandnes Uldvarefabrik. 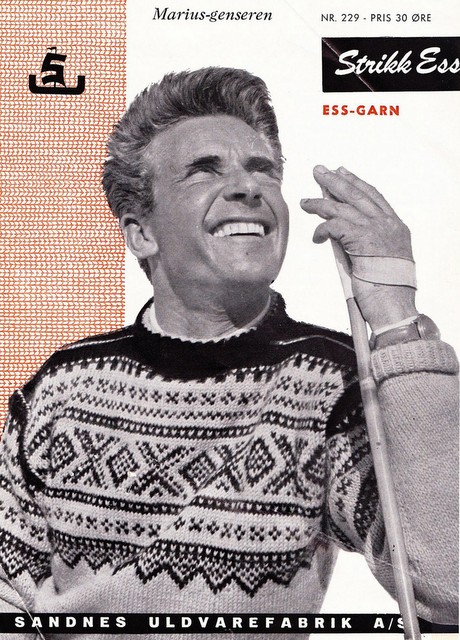 Marius Eriksen, a former war hero and top skier, had a supporting role in the movie. Together with the leading actor, he wore Unn Søiland Dale’s blue-red-white sweater in the movie, and afterwards he starred in advertisements promoting the sweater (in a white version) as Mariusgensenseren.

Today Unn Søiland Dales’ daugther has copyright to the pattern. In 2008 she allowed Rauma Ullvare to make machine knitted versions of Mariusgenseren. 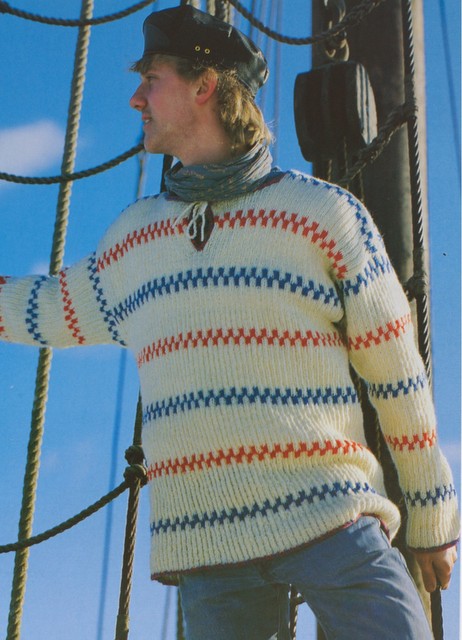 Like Iceland and The Faroe Islands, Sweden has more than one classic sweater. That said, a particular sweater from Gotland, an island on the eastcoast of Sweden, has received more fame than others. One reason being that it stands out with horizontal patterns in royal blue and red on a white background.
The sweater goes centuries back too. Carl von Linné noted the pattern and colours on the locals, when he visited Gotland in 1741.

Where to buy Nordic knits for men

So, where can you get the Nordic sweaters, Nordic knits for men?

The best solution is a grandmom living in the North, who knows how to knit. She can make the finest version.

Second best solution is using Google buying from a webshop. I haven’t found much though.